Big Smile Magazine is an online publication of articles and interviews featuring independent bands and musicians. The website serves as a platform for sharing the voices of artists who are just taking root in their craft to artists which have already put in the work to establish strong reputations locally, nationally, or world-wide, across all genres of music. 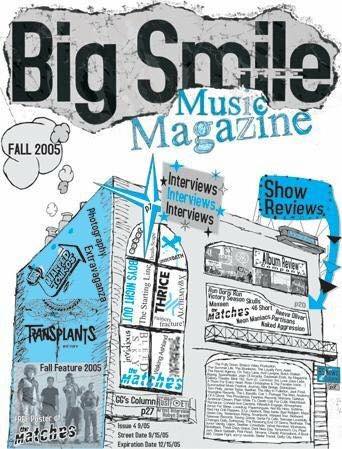 Founded in 2005 by Jon and Josh Snider, Big Smile Magazine began as an inkjet, garage-printed zine, hand distributed by the brothers across Orange County and Los Angeles. Within a few months after founding, a number of writers and photographers had been recruited to provide additional content to the zine. A few more months beyond that, the zine expanded into an online publication where a broader audience was accessible. In 2007, Matthew Montañez was recruited as a web developer to help scale the website.

Throughout the following years the Big Smile team produced hundreds of articles, interviews, concert reviews, and album reviews that highlighted new, upcoming, and established bands. We produced a compilation CD, hosted concerts, and grew our staff. Overtime however, core members of the team were pressed with other responsibilities and the momentum of our DIY efforts began to slow. As a result, growth of the platform stalled.

The online publication now aims to re-establish itself as a promoter of the bands and musicians that share the same DIY spirit that has always fueled Big Smile. We aim to become a resource for those artists in two primary ways. First, in providing a channel to get their names, voices, and music heard as we had always set out to do. Second, seeking and providing advice, tutorials, and materials for those artists to leverage towards achieving their own ambitions. We look forward to this new era of Big Smile Magazine.