Following support dates with both Panic! At The Disco and Imagine Dragons, Brooklyn indie rockers X Ambassadors will headline an east coast tour in April. Kicking off April 8th in Rochester, NY at Bug Jar the tour will make a stop at Bowery Ballroom in New York City. Parade of Lights will open on all dates. Tickets go on sale tomorrow, January 24th. See below for a list of all tour dates including the remaining dates with Panic! At The Disco and Imagine Dragons.

Next Tuesday, January 28th, X Ambassadors will release The Reason EP on KIDinaKORNER/Interscope Records. Produced by Alex Da Kid and X Ambassadors, the five song EP tells the story of someone who gave up their dream and had the courage to start over. Track listing for The Reason EP is: “Free & Lonely,” “The Business,” “Giants,” “Unsteady” and a the bonus song “Shining.”

Growing up in small-town upstate New York, X Ambassadors frontman Sam Harris, his brother Casey, and childhood friend Noah Feldshuh bonded over their obsessive love for punk, rock & roll, soul, and hip-hop. Forming their first band in middle school, the three channeled their infatuation with artists as eclectic as The Stooges and The Staple Singers into a string of musical projects that sharply clashed with their local scene’s favoring of folk and country. After graduating high school and decamping to New York City, the Harris brothers and Noah joined up with L.A.-raised drummer Adam Levin—a move that helped X Ambassadors solidify their sound into a groove-fueled take on alt-pop. In 2013 X Ambassadors signed with KIDinaKORNER/Interscope Records and released their Love Songs Drug Songs EP which featured the single “Unconsolable.”

2014 dates supporting Panic! At The Disco: 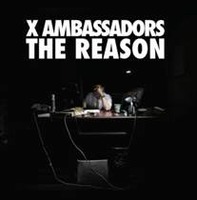