Big Smile Magazine caught up with members of The Absurd, Ben Foerg, Josh Loney and Colin Jensen at their rehearsal space in Culver City. Ben and Josh met while they were both in college in Detroit, Michigan. After a few months of debauchery, acid and philosophical conversations about absurdity, Ben and Josh formed The Absurd. While both of them were out in downtown Los Angeles, they stumbled upon Colin, playing drums on a bunch of buckets and immediately knew that was the guy they were looking for. We met up with them over a few tall cans and sat down to talk about their journey to Los Angeles, playing venues, networking with other bands and their intent of making music absurd again.

Catch the Absurd rock out at their Satellite residency in March.

You guys came from Michigan, what type of challenges did you think you’d face moving to Los Angeles to become musicians?

Ben I was personally bored with my life in Detroit and I wanted to venture out. I knew that I wanted to be in a big city like New York, Seattle or Los Angeles, and I knew that LA was one of the toughest places to make it in music, but we wanted to come out here anyway and try it for ourselves.

Josh It’s definitely one of the toughest cities to work in as a musician.

Do you ever think that you should have stayed in Detroit and grown your fan-base there before coming to LA?

Josh I always tell people that if I’d known I was gonna be in a band, I would’ve just stayed in Detroit. In hindsight, Detroit is now hipster-ville USA so I feel that we would be able to rip it up there and get noticed much faster.

Did you find it easy to get shows, meet people and get integrated into the LA music scene?

Ben It was definitely a challenge at first because we didn’t know anyone. I remember going to venues and clubs and thinking we would never have a shot of playing there.

Josh Yeah, we eventually started to play with other bands and would meet people in green rooms. We found it really easy to network after a while and started to play shows with the bands we really liked.

Ben That’s definitely one of the great things about LA, is that eventually we were finding other like-minded people, who were bored with the music scene and wanted to do something different. It’s one of the reasons we got involved with Westside Revival and the dudes from Westerner.

Josh The scene that we wanted to be apart of didn't really exist yet so we had to essentially join/create one for ourselves. I heard about this band called The Growlers and how they do this festival called Beach Goth. That was something that they created because it was missing from the music scene. They’ve had a lot of success with it. That’s something that we also want to do.

I remember going to venues and clubs and thinking we would never have a shot of playing there.

What are some of your favorite venues to play in LA?

Ben Rafa’s is the best! It’s in Echo Park, at the same building as the Echo. The owner, Rafa has had the building for over 20 years and it’s a total DIY space.

Josh Rafa’s is the most punk rock place in Los Angeles. The music video for ‘Boots On The Ground’ was filmed at Rafa’s.

Ben But, we’ve played at Silverlake Lounge, Viper Room, The Satellite and basically every dive bar that you can think of in LA.

Josh Harvelle’s is a great place as well because they do such a great job of building a community of bands that want to play together. 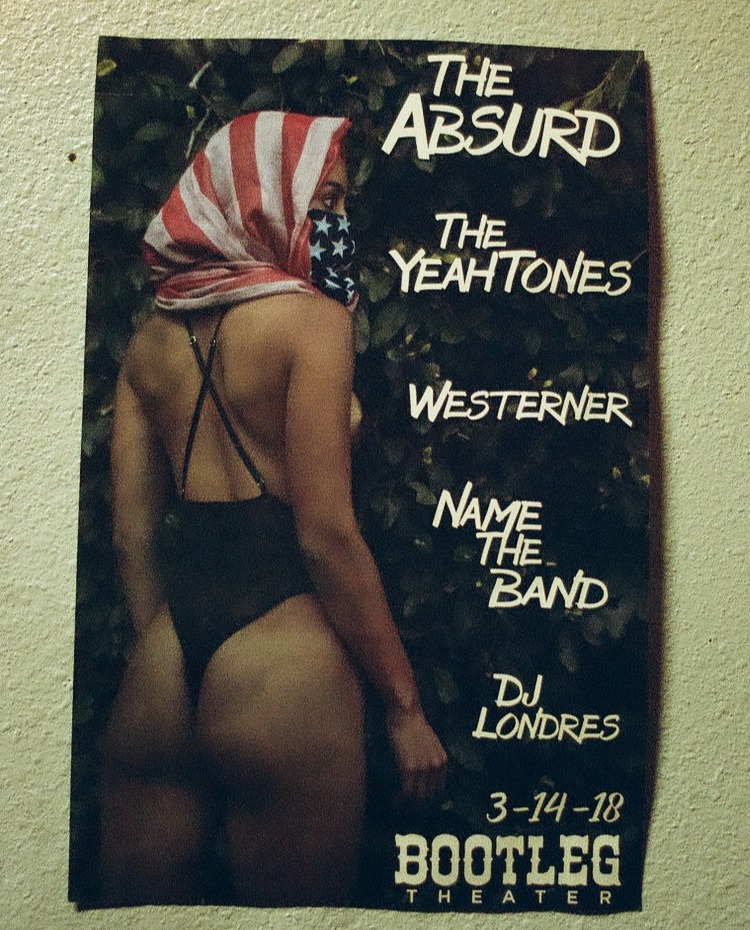 Harvelle’s is a great place as well because they do such a great job of building a community of bands that want to play together.

How would you describe some of the characteristics of your music?

Josh For us, It’s about having a good groove and catchy hooks and no matter what kind of music you’re making that should be the key.

Collin I also think that we’re a really raw band. We’re definitely not this cookie cutter band that plays it safe on stage. 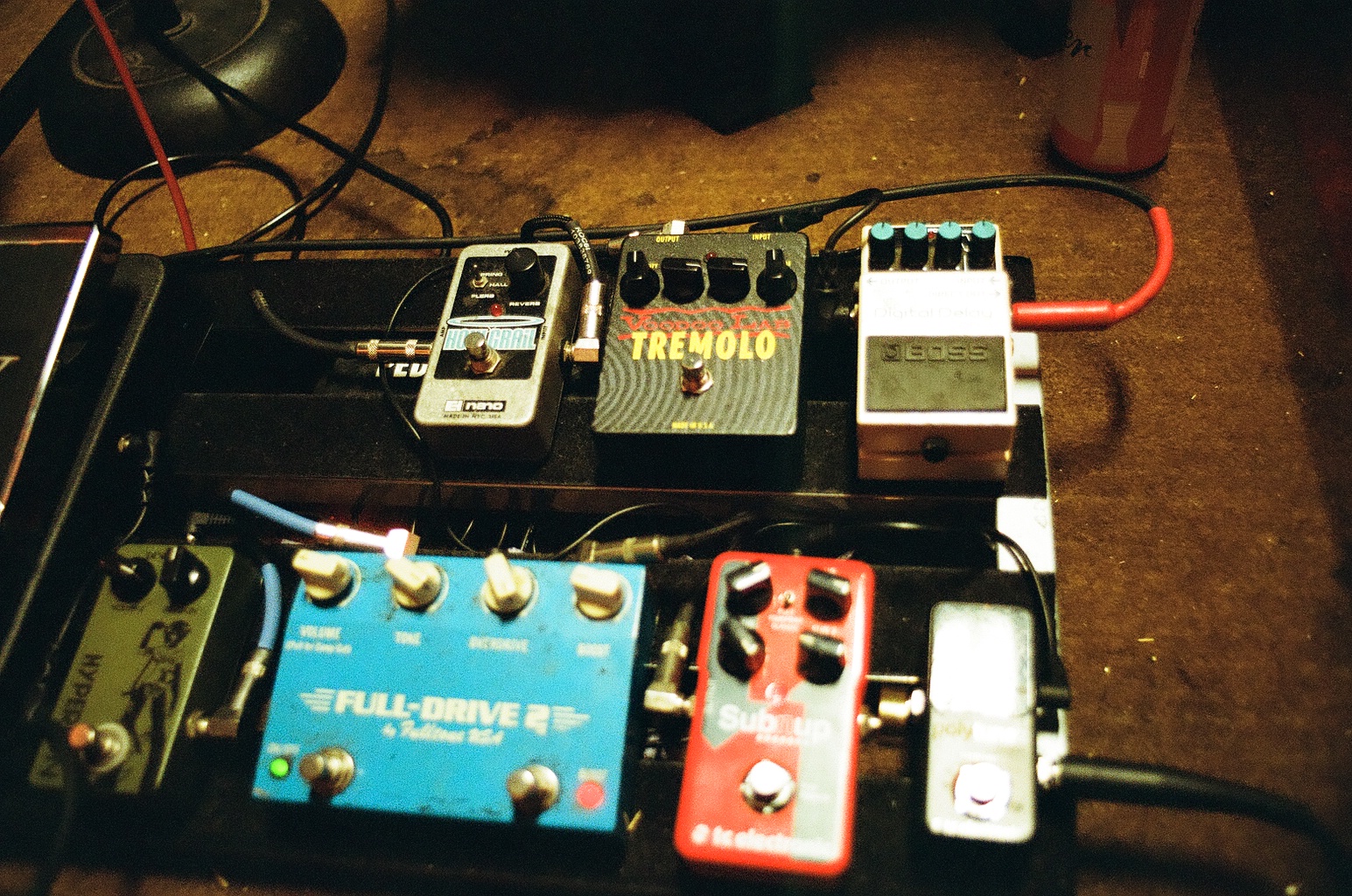 You guys are about to release your first full length album called, Build The Wall. Could you tell us what to expect?

Ben Well, we couldn’t come up with a name for the album so we used the name of one of our songs instead. You know, the one that is going to get us the most attention.

Do people have a lot of negative attitudes towards you guys because of the name of the album?

Josh Yeah, it’s definitely pissed off a lot of people.

Ben We have a little bit of a history of being provocateurs and we’ve been dropped from shows in LA and a few other places. I’ve had to explain our sound to people by saying, we sound like Queens of the Stone Age, Led Zeppelin, Black Sabbath etc.

Josh People have assumed that we’re Trump supporters and have told us that they won’t play with us based on bullshit that they hear about us from other people instead of listening to our music.

Ben We’re all political nerds and it’s great to see that people care about what’s going on right now. But the thing is, we don’t go out of our way to say we’re not Trump supporters and we’re not Hillary supporters or anything. I prefer to remain kind of apolitical in that sense just because the band shouldn’t have a political identity. I’m not interested in being Rage Against The Machine, although I think they’re awesome.

We definitely feel that you nailed that because the video shows how all of these like-minded people are banding together with this mob mentality.

Ben Really I think the album’s about the psychological conditions about the country because something broke. People are at each other’s throats and it’s creating these insane fucking problems. In the song, Build The Wall there’s some stuff that’s pretty clearly about Trump supporters because some of them are fucking morons. But, Some people feel like that song was about Clinton supporters, so there you have it. 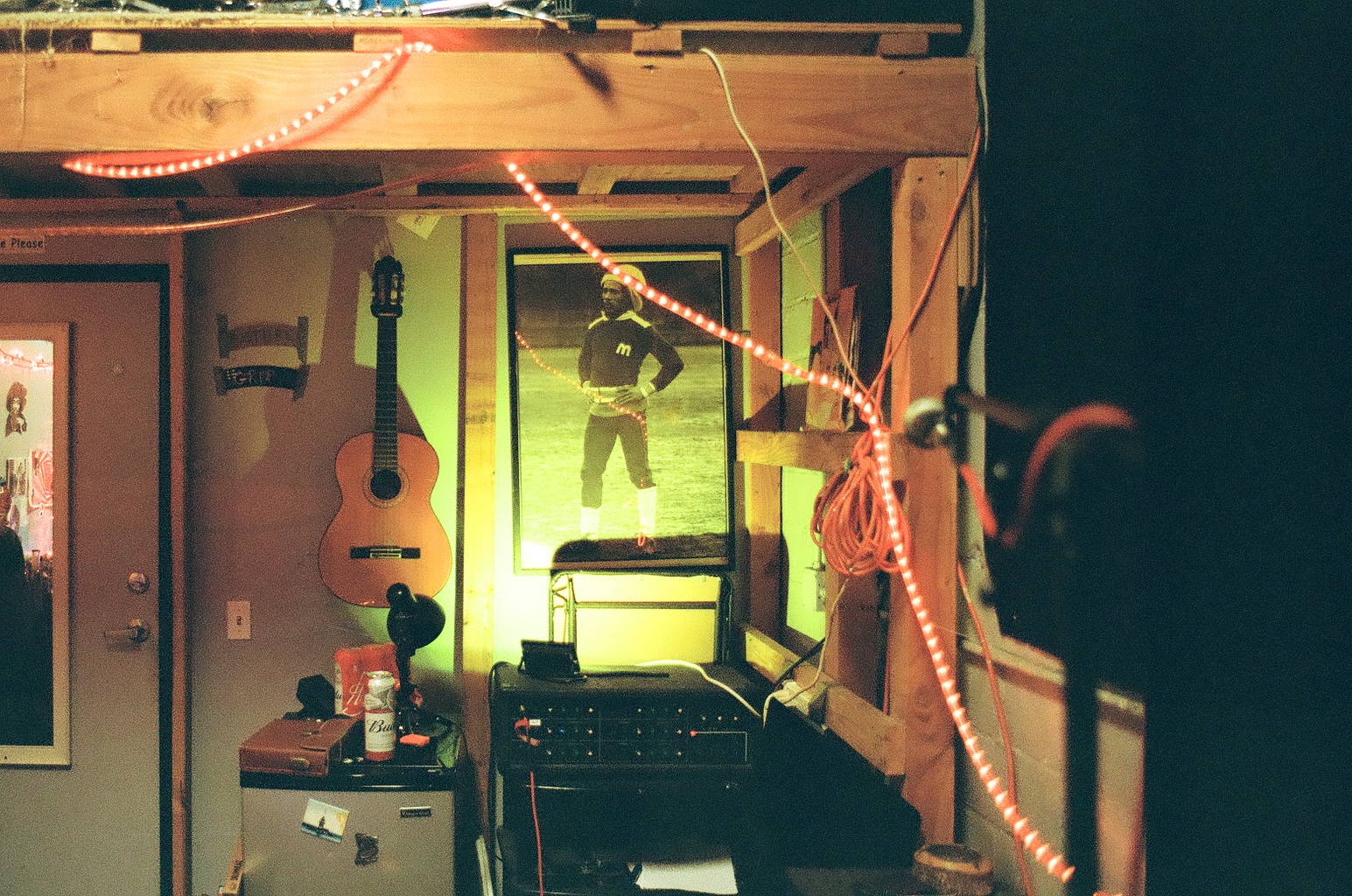 When it came to recording your album who did you work with and how did you guys meet?

Josh This motherfucker who just walked in, Josh. He plays for a band called Rose Child, who Ben met while he was playing with a band called Braves. We all met while playing at the Satellite. That’s the beautiful thing about L.A, by the way is that their is this kind of relaxed atmosphere. Josh had the sensibility to articulate what we wanted the album to sound like.

Ben We ended up recording the album at a studio called Canyon, which is located in Laurel Canyon, CA. 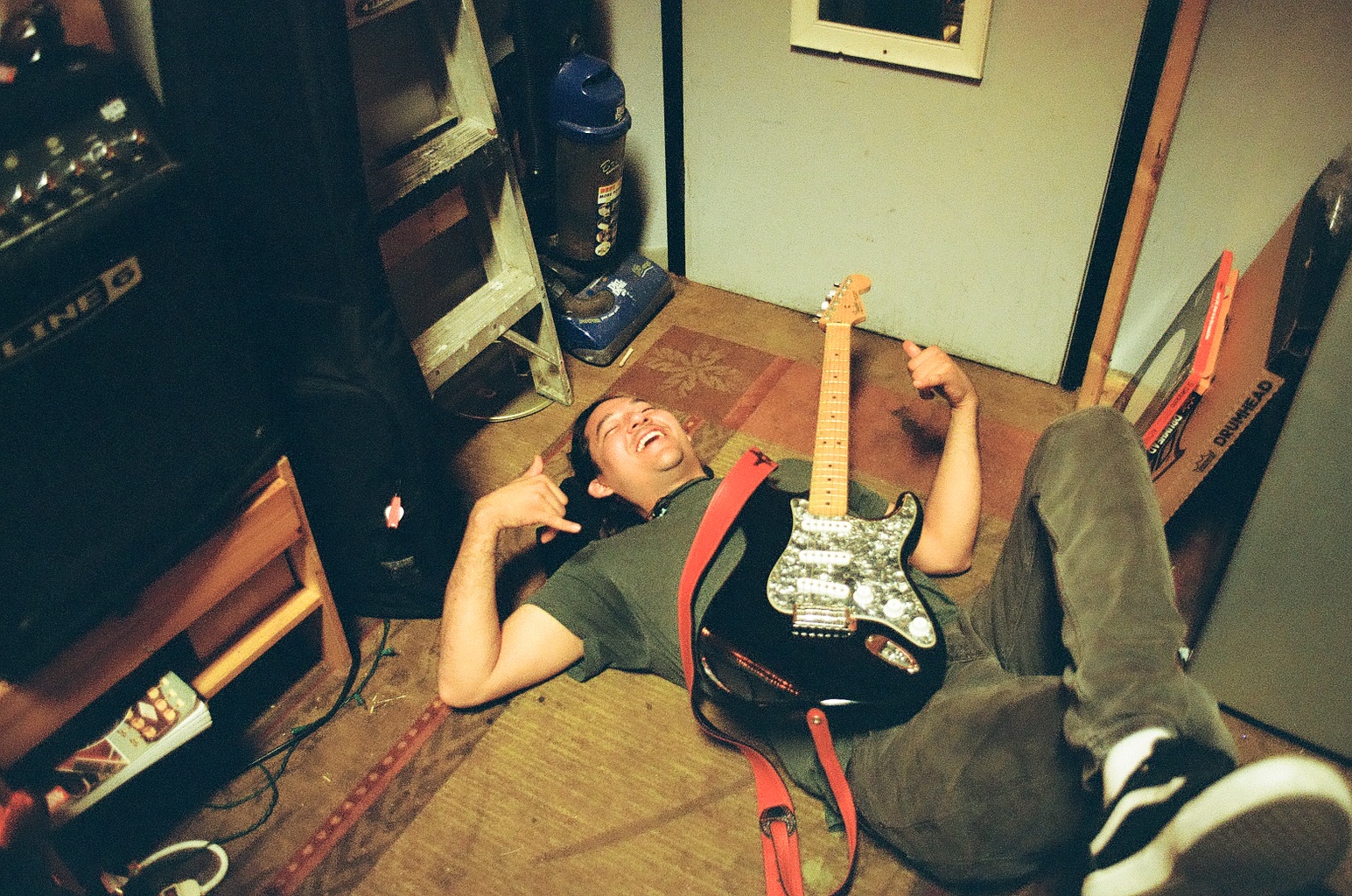 When it comes to promoting your new album do you already have plans or a strategy?

Ben I’m just going to stand on the corner of Pico and Robertson and yell at people to buy our album. But, with a lot of that stuff like marketing, musicians are just shit at doing business. So, it’s definitely something that we struggle with because it basically becomes a full-time job. You’re spending a lot of time pitching your music, writing e-mails, doing interviews, posting content on social media and then finally playing shows.

Josh One thing that we started doing differently is having single release shows to help promote songs we know are going to be in the album. This helps stay in a rhythm of playing shows while promoting our new music and have people get excited about it before the album comes out.

Is producing merch still a worthwhile investment for The Absurd?

Ben YES! We were kind of late to the merch game, but it’s definitely one of the ways that bands can make a real profit because album sales are shit. We’ve been producing shirts right now that say ‘Make America Absurd Again’ and those shirts seem to make people angry.

Have you considered or have you worked with managers or bookers to book shows?

Josh We’ve definitely had a couple of suitors and someone that we were working with previously but, ultimately we decided to do this on our own. As crazy as that sounds with all of the other shit we have to deal with, we decided to do as much as we can on our own because we simply can’t afford the help.

Would you ever consider signing to a major label?

Ben At the end of the day, signing on to a major label would be great because a lot of the logistical things get taken care of for you and you can simply focus on the music or going on tour and shit like that. But, labels take most of the profits that they make from musicians. I’d rather go lose everything doing my own label because we would get the exposure, fans, networking and most importantly the experience of doing it on your own.

Josh Yeah, there’s just a lot of bad deals going on right now because of streaming services, YouTube and shit like that were indie artists aren’t making anything from streams.

What’s been the most challenging part of being in a band and writing music together?

Ben Not killing each other.

Collin It’s really about learning how much each member is contributing to the song or the band. We all know that not one single person can have the vision of how the song should be and sound because we all have ideas and we think we do a good job of balancing those ideas.

Ben Basically, know what you’re supposed to do and how you’re contributing to the band. Writing music isn’t a math formula, and its an imperfect process but it works. 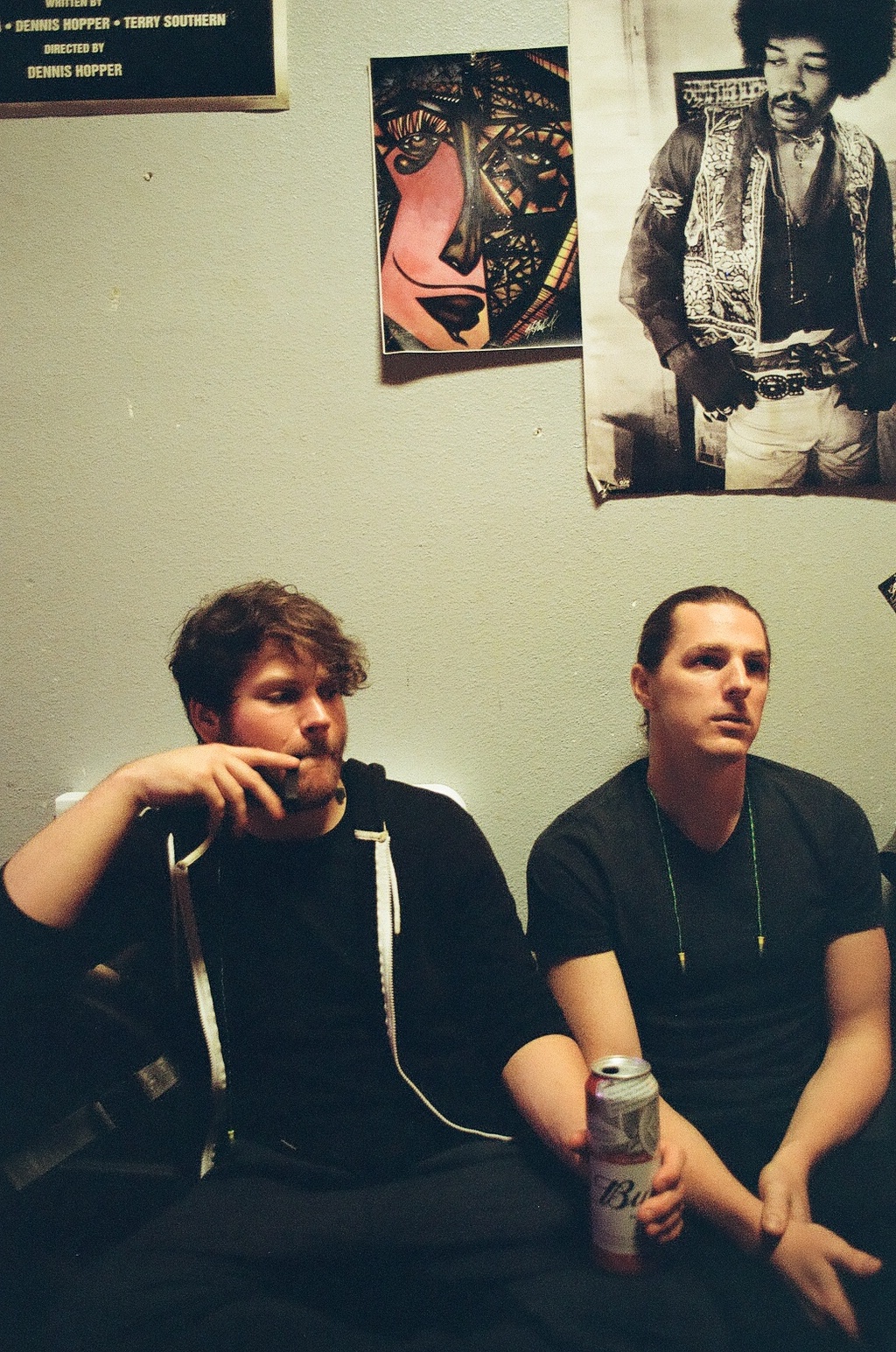 What advice would you give to a group of friends that are just starting out?

Josh At the end of the day, you gotta have the drive and want to do this. This isn’t some glamorous lifestyle by an means, but we knew what we were getting ourselves into when we decided to make a band together. It’s been fucking great.

Ben But, in all seriousness, you gotta have the “come in early and leave late” kind of attitude. In a place like LA, you’re gonna meet a lot of people and those people will have connections that you’re going to want to be a part of. So, don’t have the ego coming into it where you’re too cool to talk to anyone. Find a community you also want to be apart of.