What is your MySpace? www.myspace.com/worhorse

What genre is your music?
Metal-punk

What are some of the shows you have coming up?
We have 2 upcoming shows, one with VEKTOR from Arizona this saturday at the Blue House Cafe and the other on Jan 31 at the Knitting Factory with Speculum from San Diego.

Who got you interested in playing this kind of music?
A lot of things. Specifically the love of collecting and writing music.

What is music to you?
Something to relate to and sometimes a way of releasing anger.

How did you come up with your band name?
Manny actually came up with it. It was originally WARHORSE but was changed to Worhorse in fear of getting confused with a already established Doom metal band from Massachusetts.

What other bands have you been in, why did they end or how are they going?
This is my first band. Manny was in Decontrol(now know as Life in Exile) before Worhorse, I believe he was replaced with a different singer due to the change in their styles of music and other things not worth mentioning. Joe was in Metalsfaith, The Unspoken, Lost Unity and I believe they are all still around but his main focus is with Worhorse. Jorge plays in tons of bands off and on, here are a few: Goredface, HFFS, Cara De mil Putasos, Progeria, Cthuwulf, Ruido and many others. Carlos was in the same bands joe was in.

Did you have any previous band names?
Nope, it was going to be disgorge but then Manny came up with a Better name.

What venue would you like to play the most that you haven't played at?
Not necessarily a venue but I think we'd all like to play a huge open air metal festival like those you would see in the 80's. They don't have to many of those here in the states anymore, you'd have to go to europe for one of those.

When, Where and How was your first show?
Gosh, it was maybe late 2001 I believe. We played some house party in Los Angeles and it was around 1 am or so. We got a pretty good response.

Who do you one day want to play a show with or open for?
For this little Swedish heavy metal band called WOLF!

Why do you play music? Because we love it.

What makes you strive to be heard?
Seeing friends bands get signed and get on big tours.. It makes you feel like anybody can do it.

What inspires most of your lyrics?
Everything really. Life more specifically, most of our lyrics are metaphorical. But we try to stay away from being political, its a very harsh subject since we all have different Political views..

What brought your band together?
Actually i asked Manny to start a band with me.

When was your band formed?
Sometime in 2001 I believe.

Where do you wish for your band to be in 5 years?
Touring in Europe.

What do you think its going to take to get there?
Lots of practice, work, promoting, getting on a decent label and getting on a few good tours.

What is the best thing about being your band?
We're all friends and all are serious and we know how to have fun so we're never bored.

Where have you been playing lately and how has your response been?
We've played in lost of different places, but recently we opened up for EL DOPA aka 1332 and we received a pretty awesome response not to mention it was a brutal pitt.

Do you have any advice to starting bands?
Aim big, dont sell yourself short, be serious about what you're doing and make sure all of you in the band want to reach the same goal and the same level of understanding.

What is the best thing about music?
It inspires people to do amazing things.

What is the worst thing about music?
Sometimes bands spread bad message of hate or have gruesome lyrics and sometimes people are not mature enough to handle the message and act out the violence from the lyrics and make it a reality.

What inspires each of you to play?
life and its overwhelming complexities.

What do you want to see happen thru music in the future?
I hope it doesn't get so fast to the point where you cant tell the drums from the bass and the vocals from the guitar.

What are you doing to progress those ideas?
Keeping it simple and brutal.

What other instruments can (each person) play (other than the ones they currently play in the band)?
Joe can play the piano a little, guitar, drums, bass and synth. Carlos can play the bass and guitar.

What religion are you?
I think we're all pretty much atheist.

Any funny or interesting stories?
yeah, always! Especially since we're all above 21 and drink..its madness every time we get together.


What do you think about UFOs?
Probably real. The universe is much to large for there not to be anything else out there.

What do you guys do for work right now, other than playing music?
Jorge runs a record distribution. Manny is going to school to become a personal trainer. Joe is currently running his recording studio. Carlos Tests video games. And I work for a printing company.

Did your parents like you playing when you were younger?
Not at the begging. They thought it was a phase. But then they saw how serious we were and respected our decision in being musicians.

Does being involved in playing music make you miss out on anything?
Definitely. Sometime we just want to hang out with friends but we have a obligation with the band so our gigs come before anything else. Most of us haven't had a steady relationship for years because of the band.

What advantage do you have above other people because you play music?
Well these days not much. But you sometimes get to meet fellow musicians that share the same ideas as you and its a special feeling especially if its a band that you really look up to.

What were some of your favorite bands growing up?
Tons! But the bands we all like collectively are Metallica, Slayer, Sepultura, Megadeth, Ratt, Motley Crue, Motorhead, Discharge, Wolfpack, Skitsystem, Wolf, Judas Priest, Diamondhead.

What would you say to a kid who has no faith in himself?
Dont do drugs and listen to WORHORSE!

What would you say if you saw yourself as a 10 year old kid playing at the park? (words of advice)
Man we look like weenies! And advice-wise we'd tell ourselves to start playing instruments sooner!

Have you lost any fans for doing something drastic? (like moving to a bigger label, changing your sound, etc)
Possibly. We figure those that stuck by are true fans that stick with you through hard times.

Every bands music changes over the years, but do you like playing and the style of the old stuff?
Of-course. We prefer playing our new stuff but we still perform the oldie but goodies.

Anything you would like to say to your fans reading this interview?
what is up homies.

Have you ever been on tour, how many and how did they go?
3 mini tours. they went pretty brutal(good).

How does it feel to tour with the band members?
stressful at times, but we have to get used to each other since there is probably gonna be more tours and for longer periods of time.

What do you guys do on the road to keep busy?
Carlos has a PSP. Jorge drives. I sleep. Joe listens to his Ipod. Manny talks to jorge.

Do you have any advice to bands about to go on their first tour?
yeah. take toilet paper and DONT TAKE YOUR GIRLFRIENDS!

Do you ever get/find groupies?
Of-course not..

What's your latest cd?
its not a CD but a split EP with our brothers Holokaust from Fontana. Check them out.

How did you come up with the title?
I dont remember, it just sounded brutal.

How long did you wait from start to finish making the CD and how did it feel?
we actually did that recording in two weekends.

What do you guys think about it?
we like it, but it could always be better.

Where can we get it?
www.nuclearbbqparty.com

What do you want people to get out of listening to ""?
Hopefully the same feeling we get when we listen to Discharge.

What did your fans say about it?
They said they like the instrumental the most.

Any advice for anyone thinking about making a CD?
Take your time and you'll be a lot happier.

What do you think of Big Smile?
You have your heart in the right place. Keep it up people at Big Smile.

*All questions were answered by Abraham with the permission of others. 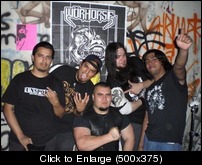