The past couple of weeks I have been on Warped Tour... and it has been awesome. I got to hang out with a bunch of friends who I don't get to see that often and I was given the opportunity to take a lot pictures.

I didn't get a chance to see every band play but I did get to see a lot of them. First, I want to say that Poison the Well is amazing. If you have never seen them live then you are missing out. They add so many little extremities to almost every song that you never hear on the record. And they rock hard and give out a lot of energy. They played a good array of songs, ranging from songs off of "The Opposite of December" to their newer songs off of "Versions". They were by far my favorite band to watch this Warped Tour.

Another awesome band that is always fun to watch is New Found Glory. Of course they put on a fun show and played songs that everyone could sing along to. They even played a new song that is going to be out on their new cd, "From the Screen to Your Stereo Pt. 2" called Kiss Me.

Underoath are one of the headliners for this year's Warped Tour... and to say they least, they own live. I don't know how many other drummers who can play so hard on drums as Aaron. And Spencer's scream sounds so untouchable live. They really put on an amazing show. So make sure to watch them when they come around to your city.

A few other bands that I checked out were: A Static Lullaby (some of my best friends in the world), Bayside, Scary Kids Scaring Kids, Paramore, The Spill Canvas, Alkaline Trio, Throwdown, The Starting Line, MxPx, Bad Religion, Tiger Army, Meg and Dia, Bless the Fall, Forever the Sickest Kids, etc.

Here are a few pictures from tour. Hope you enjoy them as much as I enjoyed taking them. 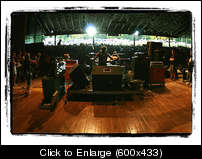