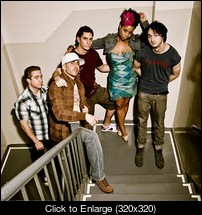 Where are you guys from?
Kinda all over the city; Dom the drummer & Jamie the bassist live in Brooklyn, Chris on keyboards is in the Bronx, while Ashanti (vocals) and Ilan (vocals) live in Queens.

How did you meet each other?
We all used to rehearse at The Sweatshop in Williamsburg, and decided it might be a good time to form something new without any pre-conceived notion of how it would sound. So a few jam sessions later, and we were playing our first shows in the Village down at Wicked Willy’s & The Bitter End.

What kind of music most influences the band?
Anything with a strong beat. It’s gotta have rhythm that propels you down the road. Stuff like 90’s hip-hop, and electronic music, combined with a soulful feel. Picture Stevie Wonder jamming with a rockin’ electronic hip-hop band.

What music could you not breathe without?
Have to have my Tribe Called Quest fix regularly. And also something high-energy, like Fugazi to get through the slow days.

What's the most embarrassing song you like right now?
Nicki Minaj – “Super Bass”. I had to learn this for a cover gig & now it won’t get out of myhead. It’s a musical STD.

What makes you different than other bands?
We’re an intensely rocking band with no guitar. We also have 2 singers, female and male; that tell a unique story every time they take the mic. Plus, we have the best rhythm section in NYC.

What category would you place your music?
Alternative Rock/ Soul

If you could meet yourself as a 10 year old, what would you say to him?
“Even though you hate it, keep practicing!”

Anything you would like to say to anyone reading this interview?
Come check us out live! You won’t likely see anything like this band anywhere else!