All I can say about this years Warped Tour, while having this year being my first, is it was a long day, it was hot, the crowds were huge, the energy was strong, and the music ranged in all different varities and sound. The sun just kept laughing in our face telling us to keep putting on more sunscreen. There were just some people who were so tan that its like being in the sun is the kind of thing theyre used to, and then there were the extremely white people who either have just never seen the light of day, or they just sadly burn very easily. As long as you brought your cooler or pack of water, or had the money to pay for over-priced water, you were in good shape. The crowds at this years Warped Tour 07 were huge. With it being the first day in Pomona to start it off, I could not believe how many people were there. On the bigger stages, if you wanted to get close to a band, you really had to suck it in and twist yourself around to get through to the front of the stage. And the booths, there were TONS of booths. So many different booths where you could buy things, show off, give tips, get tricked, and rarely get free merchandise and other things. And as for flyers. Big Smile Magazine won the contest for the most flyers. They were everywhere, everywhere you looked. We won that contest. People even dressed up for the event. Whether it was a girl "dressing to impress" i will say,(i suppose boys too?) or just dressing to a style of music, or wearing a favorite band, everyone just really went for a purpose. It was just cool to see how different everyone looked and acted at times, and how similar everyone acted and were at times. Some of the music was just so diverse with each band being different than another, but then there were also some bands who honestly just sounded like the band that played after them. People really got into their music by dancing, singing, raising a fist or hand in the air, and moshing to something heavy and fast. The biggest crowd that really made their point was the Bad Religion crowd waiting for the show to start. People got restless and started throwing bottles, CD's, random objects, and even chunks of grass, then chanted "Start the show!" A trashcan was filled with bottles and other things was also thrown towards the stage. Myself and other press people at the time were up in the barrier trying to protect our faces from even unidentified flying objects at times flying into us. Im serious, at times I have no idea what was coming towards me. So many things were just being thrown towards the stage. I was lucky because I am short and was able to duck and cower behind the tall people. But when Bad Religion came on, all the people of the crowd were happy campers. So happy, that they decided to start a fire and have a pit to go with it. Big Smile Magazine also let go of TONS of flyers into the air on cue with certain parts of one of Bad Religion's song at one point, and honestly, it looked awesome. People definately took notice. Overall this show was just fun, full of energy, and people just went there to have a good time, and that's what they did.
'll be honest with you. I only got pictures of New Found Glory and Bad Religion. I was really all over the place that day doing lots of stuff. I did what I could. Hopefully other Big Smile Magazine photographers took more pictures than I did, which Im sure is the case, and more will be up later.


New Found Glory was awesome. They had so much energy on stage. Jumping around, singing loud, and just made for a fun show. I apologize for not getting the drummer. These guys were all over the place and were constantly moving and jumping around and everytime atleast one of them would be in front of the drummer.


Bad Relgion. Wow. Just they played a great show. The crowd was happy. I was happy. Everyone had an awesome time. A pit was started, a fire was started. Im sure flyers were burnt as well. They truly brought the crowd to themselves. Everyone just had so much energy for this band.


There was also a band called Authority Zero, which I had never heard much of before, but watching them play live was extremely entertaining. The crowd was just as into them as the band was into the crowd. The singer actually jumped into the crowd at one point and kept on singing. Again they put on a great show and got the people moving and joining in on everything.
Other bands there included Alesana, All Time Low, Amber Pacific, Anberlin, As Cities Burn, Bad Religion, Bayside, Big D and the Kids Table, Bleed the Dream, Bless The Fall, Boys Like Girls, Chiodos, Circa Survice, Coheed and Cambira, Cute Is What We Aim For, Escape The Fate, Evaline, Gallows, Haste The Day, I Am Ghost, IainTerry band, K-OS, Killswitch Engage, Meg and Dia, My American Heart CA, New Found Glory, New Years Day, Paramore, Parkway Drive, Pennywise, Pepper, Pistolita, Play Radio Play, Red Jumpsuit Apparatus, Scary Kids Scaring Kids, Street Drum Corps, The Briggs, The Dear and Departed, The Fabulous Rudies, The Fall of Troy, The Human Abstract, The Matches, The Spill Canvas, The Unseen, The Used, The Vandals, Tiger Army, and Yellowcard.
Obviously to actually see all thse bands is very impossible, but I would have loved to have about 30 clones of myself at this show to help. 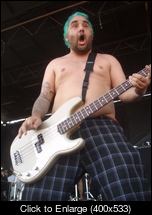 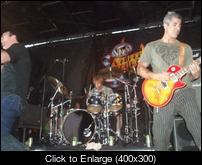