It's also, in one way, the most different Vader album. Unlike their other albums, which usually has their "death metal with thrash elements" mix, Litany seems to have close to almost no thrash mixture. There are maybe a handfull of riffs or sections in this brutal, magnum opus 11 song - 30 minute album, but not enough to really be called thrash. This album doesn't beat their godly 1995 breakthrough album "De Profundis" of course but nonetheless, this is their 2nd best album and a true classic!

Litany starts off with Wings: probably their most well-known song. It starts off really kind of groovy with the bass drums being played with a funky rhythm. As the double bass is clear in your ears...you're pounded upon relentlessly by an unbreakable wall of pure death metal. The lead in the song is wonderful; continous tapping with Peter Wiwczarek's (Guitar and vocals) amazing talent at the Whammy Bar, slowing down then back to the main riff; which goes right into the "Breakdown of the Gods." The harmonics at the end of the riff is truly amazing. The lyrics focus on a God that is being used by his people for slaying others. Truly an amazing piece.

The One Made of Dreams comes next. Working it's way to madness as the blasting stops for a moment, coming in with a melodic riff that lets your mind imagine letting you become the dream. A very short song yes (as with a few other songs on the album) but still very catchy and brutal. The clean guitar riff around the very end has a great effect, giving you a sense of tranquility. Then the distortion comes at you with full force to remind you you're still listening to death metal!

One of their live-staples comes in at track 3: "Xeper." Many out there claim Vader as being a good yet simplistic band. Not only are they not simplistic, but the opening riff certainly backs up that claim. Vader can play techincally if they wanted to (hear the beginning of "Blood of Kingu" and the constant riff changes of "Black to the Blind"), Nonetheless the beginning riff is awesome, coming then with a riff that is sure to even headbang the decapitated. The lyrics in the song talk about becoming one with yourself, taking place in an Egyptian time period. The catchiness in this song has made it a live staple for most of their shows. Xeper's the only song in the album with no blast beats, so it's somewhat of an easier listen.

The next highlight, and tied with Wings comes the title track: "Litany". Not only do I feel is their very best song, but the lyrical meaning of the song to me speaks to my heart. I also have to say it's Doc's best drum performance. When all of the instruments come together in the beginning, try hearing all of Doc's (drummer) fast cymbal work and constant tightness in his drum hits. The lyrics talk about your "litany" to someone you hate and despise. It's used in a creative adjective form; an actual litany, which truly lets the song shine. The riff changes in the song are also truly something else. A truly captivating masterpiece, clocking in at only 3 minutes. "This is what you'll always be!!!"

After the ending of Litany, you're then surrounded by the sound of a tank, coming your way. This is "Cold Demons"; the song of a tank and it's massive ways of destruction. It's a short yet well-developed song. You can picture yourself fleeing for your life from the cold monster. And as the song ends, it moves on to another target in another direction...leaving you in the midst of the Earth, disintegrated.

"The Calling" awaits the listener next. This is probably the catchiest song on the album, with it's part palm-muted and high end note riffs. After the lead, it goes back to the chorus, and then breaks down into a fast, mulitple note chug festival. Around the end of the song though, Peter's vocals get kind of buried. Maybe a production problem?

#2 of 4 songs under two minutes on this album:" North" coming in at track 7. It doesn't waste time as it starts with pure drum blasting and chaos. Clocking in at around 1:30, you're left with no time to recover before the very next song.

"Forwards to Die!!!" is next, being under two minutes as well. This song is just plain death metal; short and brutal to the point. Nothing so great about the song, except for the lyrical structure; which adds suspense to the song. I see the song as the opener for the next one...

"A World of Hurt"...after the crazy sliding riff, you get to hear Doc let out his anger in this blistering, cranium-imploding blasting. A more straight-forward song on this album, but a heavy one nonetheless.

One of my other favorites, The Word Made Flesh. A very complete and tiring song to listen to. Various in the time and tempo changes, you're introduced to a hard pounding mixture followed by a great lead trade-off. The riffs are fun to listen to, different usages of palm-muting with stop and starts as well.

The Final Massacre is one of Vader's first songs. Remade especially for this album, it's not only faster than the original, but more brutal and beautifully composed.
The opening riff embarks you on a journey with death, then dealing in the heart of darkness through the last massacre on Earth. The lead is fanatastic, giving the listener the chaotic feel of the violence around them.. "Merciless...angels fly over heads!!!" Indeed a wonderful way to end the album. 9.5 / 10

The bonus track is also compelling. Lord of Desert was on the Japanese version of Litany and a regular track on the EP "Reign Forever World". The lyrics are amazing, talking of the underrated and powerful deity Seth of Egypt; fighting for his people yet condemned from his people. The Egyptian-like riff before the solo is extremely powerful and compassionate. It's a quick and relentless piece. 9.5 / 10

There you have it. Vader's second best but most brutal album. The leads are not quite up to par with De Profundis and Revelations; but nonetheless, it is an embarkment of powerful death metal! 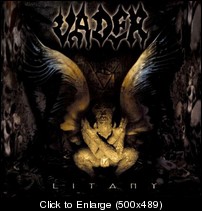