To newbies when it comes to Vader, you can surely expect relentless blasting, complex yet simple riffs, audible, original vocals, deep lyrics and amazing leads. Vader has always been true to themselves and have released classics such as Litany and Revelations; but De Profundis, their second album, has truly left an everlasting effect for the Death Metal scene and era.

The first track on this album starts with the monumental "Silent Empire" Entering the field with a compelling riff and portal-opening drums, breaking down into a slower set of riffs and complication for the listener. The solo is godly, as Vader solos usually are. The lyrics are also interesting: contemplation of the secret government many societies have. Tied with the best song on the album.

An Act of Darkness comes next, being the shortest song on the album, but by no way the worst track. Peter's vocal pattern in this song really makes you want to sing along. Good, catchy riffs and a fast lead.

Next we have the riff giant, Blood of Kingu. The beginning riffs in the song are some of Vader's most technical riffs (also the intro riff to Xeper) It's the slowest song on the album, but with the rif#e that is commoting, it's a solid song.

Incarnation comes in track # 4. It has the best leads on the album. An incrediable whammy fest, with a wah-wah pedal, and tapping and all the good stuff Peter can create and perform. The bridge in the song is really captivating (the riffs during "Magick Triumphers..." and until the solo), A solid mid-paced track.

Ahh...just about every Vader fan's favorite...Sothis. Their most famous live song staple, starring their guitar triplet purgatory. Sothis has many qualities from every Vader song. Suspensful riffs, instant pauses, a great lead section. This is a classic Vader song.

Revolt...one of my favorite songs on the album. Starts off with almost a black metal riff and goes into the traditional Vader-break in. The solos in the song are incrediable. With the backing riff playing, you hear such emotion...

Of Moon, Bloood, Dream and Me takes the place of track # 7. The 'catchiest' song on the album. It's a solid song, but if I would have to pick the least strongest track, it would be this one. It's still good though. Especially the riff on "With head down..."

Vision And The Voice is tied with Silent Empire. Also remade from the Sothis EP. This song just speaks to you. The riffing also, I might add, is prime and doesn't stop. Really, there's quite a load of riffs here. The solos are in excellent form, especially the end of the second one. There's a little break-in before the solos too. An excellent song.

Finally,the last track of the album...Reborn In Flames. The most emotional track,and an excellent finisher. The song starts off real slow and lets the energy sink into you before the pre-verse kicks in. The lyrics also really tell a story. A story of armageddon, the earth being redone in a flaming chaotic cleanse. "Born to destroy..." shows the riffing taking its form, as the earth has now learned its plagueful lesson. The 2nd set of solos are beautiful...really sparking into form. After the last chord...the world has ended...full of decaying corpses...then it comes back for one more run. Truly a great ending track for an epic album.

De Profundis in my opinion is Vader's best. Truly an epic example of superior musicanship. Peter does an excellent job giving his best, performing guitar and songwriting in prime form. His vocals are solid as usual too. Doc's drumming also needs to be recognized. His drumming and blasting skills are really uncanny. Not the best drummer, but definately needs to be noticed. Jackie (Guitar) and Shambo (Bass) also give a good show.

Any Death metal fan needs to hear this album or buy it. It truly is to me, my favorite death metal album release and Vader release. Hail to metal! 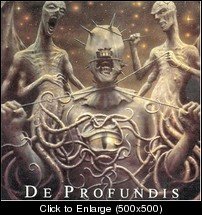