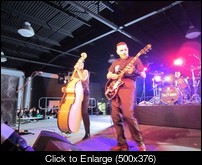 Friday, March 2, 2012 Musink at Orange County Fairgrounds Tattoos and rock ‘n’ roll! Perfect combination at the Orange County Fairgrounds for Musink 2012. Going on its fifth year this 3 day festival included hundreds of tattoo artists and some distinguished rock bands including Tiger Army, Guana Batz, Against Me!, Alkaline Trio, A New Found Glory, and Yellowcard, Also, there were several vendors displaying prime artwork and rock ‘n’ roll accessories. As I arrived to the parking lot of the Fairgrounds I did not anticipate to see the lot empty and oddly quiet. Even after walking into the venue, it seemed very quiet compared to other rock ‘n’ roll festivities I’ve attended. Nevertheless, as time approached for this evening’s headliner, Tiger Army, the crowd seemed to amplify. They opened up the stage with great anticipation from the loud crowd. This world renowned psychobilly band opened up with,” Prelude: Nightfall”. The crowd went clamoruous, moving their bodies to the sounds of the superb music. The show went on for about an hour but didn’t end till they bestowed a 3 song encore including: “Devil Girl”, “Valley of Dreams”, and my favorite, “Never Die”. This was one of the two scheduled shows Tiger Army this year. The next show at the San Diego House Of Blues on Friday April 7, 2012. Im gratified to have attended one of these amazing performances and hope to see many others in the near future.