Your mom was right, first impressions really do count. And your first impression of the self titled release from The Winery Dogs should be ‘Wow! These are some great songs’ followed by the almost equally important second impression of ‘Damn! These guys can really play’. Well of course these guys can play. The Winery Dogs are Richie Kotzen, Mike Portnoy, and Billy Sheehan. Three musical titans whose collective resume includes Talas, Dream Theater, David Lee Roth, Poison (wtf), Mr. Big, Avenged Seven Fold, and so many side collaborations that a simple internet search could shut down Google for a week.

But back to the tunes! The Winery Dogs members have achieved well deserved acclaim in genres where the number and speed of the notes played is the song. In this vibrant collection, the song writing, arrangements, and vibe take the limelight. Here in the new age of the super group, we’ve seen Them Crooked Vultures get a little too artsy for their own good and witnessed the impressive phoning it in of Black Country Communion. None of that is evident here. The Dogs have a potent mix of amped up R&B, 70’s gas pedal rockers, and stripper (or exotic dancer, depending on your budget) approved grinding. Hell, even the sprinkled in ballads didn’t have me reaching for the flush valve. ‘Elevate’ is as good of an album opener as there ever was! It could make Glenn Hughes and Hanson equally envious of the skill sets used in the writing and riffing.

But what about the notes, you ask? Don’t worry; there are a million of them on display. This three headed dog has too many chops not play like it has rabies. ‘Not Hopeless’ and ‘Time Machine’ are clinics on technical playing skills but don’t sound like meth addled fax machines with Turrets’ Syndrome. Like the best bands of our youth, The Winery Dogs can navigate subtle stylistic shifts without sounding like frauds. ‘One More Time’ moves cheerfully into Little Feat territory while ‘The Dying’ will have your girlfriend slithering around on the hood of your Rolls Royce while the dry ice creeps and the Bic lighters sway.
Lyrically, The Winery Dogs stay consistently soulful and won’t ever bum you out with vision of post apocalyptic hellscapes. Kudos to the boys for that! This album is must have material for fans of familiar rock leanings searching for new songs. And, yes, it really is all about the songs. 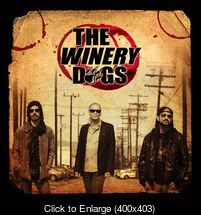