KSPC’s 32nd annual CD and Record Expo took place this Sunday in Claremont, California. The Smith Campus Center Ballroom was filled with music, movies, and collecting enthusiasts. “It’s a great deal. We get free parking, an air conditioned room, and cheap music, and there is just something refreshing about buying tangible music and not downloading,” chuckled Richard Freeman of Brea, California.

Bud Menier, who has been selling at expos full time for 10 years and on and off for 30 years, came all the way from San Jose to participate in the expo. He says he enjoys coming to meet people. “I like the crowd and seeing everyone’s different tastes.” He brings mostly CDs and vinyl to the expos. He prefers vinyl himself because the music sounds mature. “I have tried CDs and I didn’t hear all the sounds I like to hear Mick Jagger doing like on my records.”

It seems that many people are joining Menier’s thoughts. Andy Jensen, who has been selling at the Claremont expo for over 10 years, says “vinyl is coming back.” He has even noticed the college-aged kids buying it. Jensen buys most of his items with the intent to re-sell. He collects at garage sales, storage sales, and estate sales. He grins ear to ear when he states, “When old people die, that’s good. Then they leave their records.”

Ron Karl also buys albums with the objective to re-sell them. “I will be browsing around thinking, Who needs this?” He calls his stock the “over collection.”

Whether it is CDs, DVDs, vinyl, posters, or other memorabilia that sells best, something keeps brining both buyers and sellers back to KSPC’s Expo. Donald Duran of Ontario, Calif. has been coming to the expo since 2006. “I like the records, I’ve been collecting them for four years. I’m a fan of all genres and the prices are good.”

This year’s CD and record expo drew in many different types and styles. With an abundance of different products, diverse style, an air-conditioned room, and the old-school “cash only” theme, why wouldn’t it be a hit? Those who frequent the Expo take home CDs, records, and memorabilia, but it is clear that the main seller is the camaraderie and the fun of being among other music lovers and getting to share the love with them. 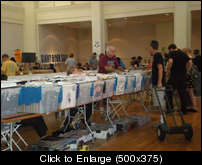