The Misfits @ The Galaxy 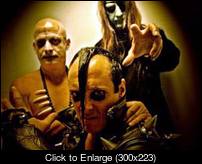 Crazy music, moshing, Mohawks, and oh yeah a little band called The Misfits that nobody has probably ever heard of <---insert sarcastic tone here. On Wednesday night I had the pleasure of seeing the Misfits at The Galaxy. mosquito biteie Trap and DI also killed the stage as the opening acts for the well known horror punk band.

The night opened up with a local O.C. punk band mosquito biteie Trap. During their set in true punk rock fashion, elbows were being thrown everywhere in the pit and the moshing had commenced. I say one of the only things this band had going for them was the fact that the lead singer was a really hot chick; otherwise they were just another punk band.

After mosquito biteie Trap had tweaked my ears, DI took to the stage with funny front man Casey Royer tearing it up. It didn't take long after they started playing to see that the pit was starting to get restless and anxious for the main event to take the stage. The pit went crazy and Casey egged on the moshing. Kids were running from back stage and diving into the pit, and the night was definitely starting to pick up speed. One thing I have to say about DI is that these guys can really play. They had a great stage presence and super catchy melodies. I loved this song they had about all the things they hate about the O.C. The parts of the lyrics I caught said something along the lines of...love the scene, f%$k the police here, we're taking O.C. back. Then they proceeded to hate on Disneyland for a bit. It wasn't before too long that the time had finally come to get crazy with the Misfits.

Chain linked fences, giant skulls, jack o' lanterns, and fog breathing Gargoyles set the stage for The Misfits horror fest of a concert. As soon as the theme song to the movie Halloween started, every Fiend in that place went crazy. Bassist and Lead singer Jerry Only entered the stage in his usual spiked leather jacket, and sported a Misfits T-shirt. They opened up their set with one of their old songs, "Halloween." They played some of the newer songs, but I think it really got the crowd rowdy to hear some of their older stuff which included; "Dig up Her Bones", “Helena," and "We are 138." After their set the kids from the O.C. went crazy and wanted another dose of The Misfits, so they came out and played an encore. To a screaming, excited crowd they closed out their encore with "Rise Above."

It seems to me that although The Misfits have been around for awhile, they certainly have not lost their popularity amongst the OC Punk Rock scene. Between DI and The Misfits I would have to say that I definitely got my fill of some killer punk rock!

...on a side note I'm bummed that all the pictures I took at the concert didn't really come out very well, so unfortunately my words are all I have to share of my night with The Misfits. Sorry guys!