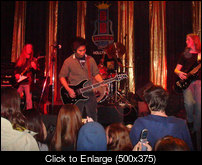 Featured Artists: The Illuminati; Genre: Metal;
The February 4th show was a battle of the bands show. Unfortunately I arrived just as the Illuminati started playing and couldn't hang out long after so I was unable to catch any other bands. Illuminati took the stage at 8p.m. and I arrived at about 8:01. As I walked toward B.B. Kings I heard the sounds of heavy distortion and bass riffs quick as the guitar solos. I was blown away before I stepped through the door. I had never heard the Illuminati's music before; I was invited to the show by bassist William that I met at school. I was impressed right away. The young band out of Monrovia, CA consists of members Kevin King, Andretti Almalel, William Kirkendall, and Sam McAdam. Because it was a battle of the bands night, the Illuminati was only able to play a few songs. I really enjoyed their song structures which transitioned from heavy rhythms to short vocal verses to intense solos backed by bass riffs and drums that sustain a powerful backing rhythm. The most interesting aspect about the Illuminati was how they maintained a rock 'n roll feel without drifting too far into full on metal while having some of the heaviest verses that I've ever heard from a young band. The sound quality of B.B. King's however is not the best around. Specifically the bass didn't come out as clear as it could have and the sound quality diminishes dramatically with each floor that you move up (3 floor venue). Despite, the drawbacks of the venue, the Illuminati put on an awesome show. I hope to catch their next show wherever they play.