Who would have thought that you could mix really rock and roll beats with the hurtful brutality of early punk? I wouldn’t say that they resemble the ramones but I could say that they have found a bridge that isn’t traveled to often. The band in this cd makes me want to wear tight leather pants and my leather jacket covered in patches and has my hawk up. It allows you rock out like it was the 80’s but then have the anger to make you wanna punch the person next to you. There aren’t really any major riffs in the music its mostly just rock mixed with a lot of melodic simple rhythms. It’s defiantly good on the ears. It’s hard to say what bands I could compare to them. But if you enjoy bar rock and punk then I suggest you check them out.

Would I recommend it? Yep 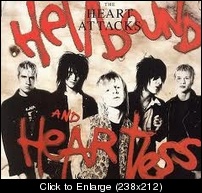