The Grouch and Eligh 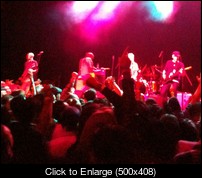 Genre: Hip Hop; Hip Hop; On July 6, 2011 The Grouch and Eligh performed in Thousand Oaks, CA at Open Borders. Open Borders is a closed book store turned venue. Honestly this place is one of the best venues I've been to. Inside they have an art exhibit, a chess board that's on the floor and an open wall for everyone to leave their own mark. Open Borders audio system was filled with elite sound and as far as the stage goes, their is no barrier between the crowd and artist which makes for an intimate show. The only thing bad I can of about the venue is the distance. Enough of that visual, let's get back to the music.

After Scarub rocked the stage solo with just his mic in his hand The Grouch and Eligh hit the stage accompanied by DJ Fresh with "Say G&E." Once G&E rushed the stage they were relentless. Thought provoking lyrics, uncanny energy, and excessive bass filled the room. "These kids are bouncing around but we have everything under control." G&E dropped almost every hit imaginable. "The Clap" , "Lake Release" , "Boom" , "I know you wana feel" , "All in" , "Everafter" , and took the crowd back with 'Mind over Matter." After letting out a full clip of G&E songs, The Grouch and Eligh would go into solo mode every now and then. The Grouch rocked "Artsy" , "Never Die" , "Breath" , "The Bay to LA" and the living legends classic "Simple Man." Eligh presented the Grey Crow with "Soul on the Road" , "Miss Busdriver (Rachel)" , "Shine" and straight bodied a freestyle over Chris Browns "Look at me now" beat.

This is how a hip hop show should be done, Just the DJ and the MC's. I drove a whole hour to this venue an didn't know what to expect. I'm so glad I went. Easily one of the best shows I've ever been to. Thanks to Scarub, The Grouch and Eligh for putting on a great show. Respect