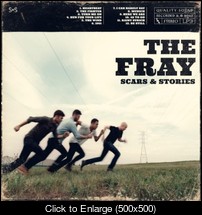 with a solid beat. Having no idea they’re even recording new music, it’s quite a treat to

hear this instant gem. The Fray have me jamming out in my car.

Hailing from Denver, Colorado - The Fray have always been a solid band with some

songs you’ll love, and others that are just good. Scars & Stories is no different.

rest of the album however does not deliver on that level but is equally good, especially

towards the end of the album. Please don’t mistake the tracks early on in the album

as bad. The album as a whole is just not as poppy or catchy as their previous work but

more mellow and classical which grew on me after a few listens.

Save A Life”. Some are a little faster and melodic but overall it’s quite an enjoyable

than “Heartbreak” to be on the Billboard 100.

anywhere close to it in pace and sound. To start the album with it sets a premature

idea in the listener’s head of what the album will be like. After that, songs like “The

Fighter” “Turn Me On” and “Run for Your Life” are songs that will grow on you, but not

what you’re expecting immediately after the hit single.

Around midway through the album to the end of the album, all the songs are extremely

solid. “Be Still” (the shortest track on the album weighs in at 2:49 in length) - is the final

song on the album and is quite unique on it’s own. It’s essentially an acoustic piano

song - beautifully written from melody to lyrics. It’s actually something I wouldn’t mind

hearing more of from them in the future.

All in all, I’d give the album 3 stars out of 4 but this is definitely a move away from the

Top 40’s and more of a “doing what makes us happy” thing. A part of me wonders

if “Heartbreak” was written just to get radio play as an advertisement ploy for the album.

and “Munich” are ample replacements and won’t disappoint the die hard fan.

The album comes out February 7, 2012 so make sure you pre-order now or pick it up

when it comes out! www.thefray.net