Canadian twin sisters Tegan and Sara Quin were barely out of high school when Neil Young and Ryan Adams began singing their praises. With their highly appreciated third release "So Jealous", I was anxious to see what their fourth full album release would entail. Would they "mature" in their music style or would they stick with that eighties pop-punk indie music with catchy melodies? While I feel that "The Con" encumpases all of these features, I also feel that the album takes a new spin musically from their previous release. For example, "Are You Ten Years Ago" contains few instruments. It is carried completely by a dynamic electro drum beat, which I absolutely love. It's clear that the Quin sisters wanted to make an album that branches out from their previous sounds and explores new territory. For any artist, it is always a tricky path to walk. However, Tegan and Sara have achieved their goal flawlessly. They no longer sound like little girls but mature and lyrical intelligent women. Every second of "The Con" showcases their maturity as musicians and as lyricists, and I couldn't ask for a better album for them. Lets just see if they can raise the bar for their next album.

For fans of: Death Cab for Cutie, Interpol, Feist 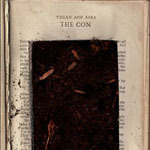