In 1989, Suffocation came to fruition. Spawning from New York and debuting such Death Metal greats as Immolation, Baphomet and Brutal Truth, they were the first innovators of Brutal, Technical Death Metal. Complex time signatures, devastating blasting, solid breakdowns, (Unfortunately the genre we know of as Metalcore destroyed the breakdown) massive growling vocals and sonic-inducing leads; were, and still are, what Suffocation has always been all about.

20 years, 2 EPs and 5 albums later, Suffocation debuted their 6th release: "Blood Oath." Named after the oath Suffocation gave when starting the band; their music will be heard by all metalheads and destroy the masses. And as with Suffocation's entire catalogue, this is no exception.

"Blood Oath" takes more of an evil (more than usual) approach in the tone of their sound than their usual technical brilliance (See "Pierced from Within"). Although there are quite the number of time changes and complex rif#e, this album incorporates a riffing style that uses more dark tones and slower passages. Right into the opening track "Blood Oath", it's quite evident that Suffocation focuses more on the mood of their music and takes you on a bleak, hellish journey. The opening riff crushes your senses and lets you know Suffocation is in charge.

Throughout the album, the lyrics focus on the destruction of mankind and the mind. "Cataclysmic Purification" discusses Armageddon and how we are all responsible in a way for it's cause. "Dismal Dream" is about your soul trapped in the hellish torment your mind has put it in. Possibly the most brutal track displayed would be "Undeserving". Heavy, decimating and shockingly brutal, the track fits the lyrics perfectly of finally having the one person in your life that tried to destroy you. Finally in your grasp, revenge is permitted in full force. Although the nature of Suffocation's lyrics are not different, the subject matter is more focused on humanity and their violent nature.

The performances by all of the band members are as usual, nothing short of awe-inspiring and captivating brilliance. Terrence Hobbs and Guy Marchais's guitar playing envisions destruction and amazement through the use of 2 guitars. There aren't as many solos as on their earlier work, but Suffocation's main point has always been their riffs and that doesn't stop here.

Mike Smith's drumming speaks wonders even 20 years later, as his Death Metal drumming has influenced the entire genre of his devastating blasting and hitting. Smith never misses a beat.

Derek Boyer's bass skills shine on the opening track and especially the bass breakdown in "Provoking the Disturbed." This is the clearest you can hear the bass out of their lastest material.

And of course, we cannot forget the brutal, crushing vocals of Frank Mullen. Founder of the death metal growl and gurgel, it's still shown years later that his vocals still remain surpreme. Never weak sounding or vocal effects present with Mullen. His vocals especially on "Mental Hemorrhage" show off his destructive vocal work.

Nevertheless, the legends of Brutal Death Metal reign surpreme on "Blood Oath." Newer fans of Death Metal should definitely appreciate all of their hard work and remind them where all of it began. 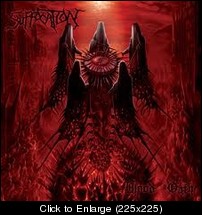