Spades & Blades - Blood of the Innocent 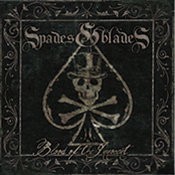 Featured Artists: Spades & Blades; Genre: Hardcore; Metal; Rock;
Spades & Blades debut album, "Blood of the Innocent", can only be described as an epic synthesis of hardcore, metalcore, and hard rock. Averaging in at about 3.5 minutes, each song follows a similar format including heavy guitar riffs, metal core break downs, and complex guitar solos. The 10 song album is focused around Catholic and Christian theology's seven deadly sins and other mortal sins: Idolatry, Pride, Murder, Lies, Sloth, Blasphemy, Greed, Envy, Adultery, and Lust. Each lyrical verse offers deep personal and social reflections based around those sins. Fans of Comeback Kid, Avenged Sevenfold, Metallica, and modern hardcore will absolutely enjoy this album. "Blood of the Innocent" will have you head-banging as soon you hit play. Please, keep your arms and legs inside the vehicle at all times; this album will take you on a hell of a ride!

Spades & Blades was formed in 2006 by members of the seasoned Los Angeles punk band "The Havoc" consisting of Jason Todd on vocals, Josiah Wiswell on Lead Guitar, Justin Havoc on guitar, Garrett Rizzi on bass, and TJ Styles on drums. Check out Spades & Blades on the soon to release Big Smile Magazine compilation and watch their live set at the Bamboo Club October 23rd.