After SIIINES just released their new EP Fukushimarama! February 11th along with their latest Music Video!

Which was produced by veteran electronic producer Ari Rhodes of Hands Up!

SIIINES, the Los Angeles based electro-rock band, has just released their new EP, Fukushimarama!, February 11th. In celebration of the release, SIIINES is teaming up with BigSmileMagazine.com to premiere as Big Smile's first ever "live interview" based online and hosted in an "open forum" type setting. The band will be answering questions from various Big Smile Magazine writers as well as fans that tune in and chime in during the interview.

With equal parts eclectic EDM and in your face rock, SIIINES willfully crosses lines to bring a unique perspective in a time when people care more about the shoes they wear than the music that they create. Formed by Travis Nesbitt and Morgan Gies (both formerly of Social Code) in 2012, SIIINES wanted to bring life and excitement back to the ailing sound. Experimenting with electronic production in the context of rock sentiment, SIIINES found a fresh sound by challenging their own preconceptions about the genre, pushing the boundaries in the marriage of electronic dance and rock.

Mid 2013, work began on Fukushimarama! A group of songs revolving around the escapist culture of denial that they felt was prevalent: Celebrity, drugs, sex, money, and other vices we use to keep ourselves from accepting the bleak realities around us. When asked about the Fukushimarama!, Gies states, "It's about watching the world burn and dancing in the flames. YOLO!"

With the release of their new EP, and tour dates on the horizon in America and Canada this spring, SIIINES are set for an explosive 2014. 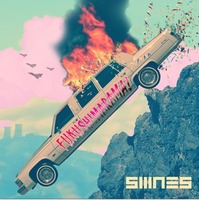