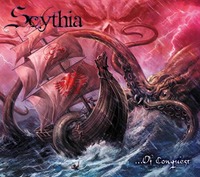 Canadian medieval-themed power metal band SCYTHIA and Decibel Magazine are teaming up today to bring you the brand new track ‘Reflections’, cut from the band’s upcoming album …Of Conquest. ‘Reflections’ is the fourth new track released from the album, which hits stores on February 25, 2014. Check out the new track at this location, exclusively via Decibel Magazine. Listen now!

“This track is a “one-of-a-kind track” on the record,” states guitarist and lead vocalist David Khan. “‘Reflections’ pays tribute to the progressive styles of the early 80’s, with a good dose of powerful modern riffs. Actually, come to think of it... this song has a lot of gems and they are all rolled into a track that clocks in at less than 5 minutes.”

Pre-order …Of Conquest now at scythia.bandcamp.com/releases.

SCYTHIA will hit the road this April on a tour Canada and the Northwest U.S.! See below for tour dates and stay tuned for more coming soon.


SCYTHIA released their new music video for ‘Bear Claw Tavern’ via Guitar World late last year. The video instantly went viral with over 80,000 views in less than a month’s time. If that isn’t impressive enough, io9 called it “20 Times Better Than ‘The Hobbit’”. Watch the video now, viewable via the band’s official YouTube page: .

Formed in 2008, SCYTHIA’s music is recognized throughout their home country for its rich, poetic storytelling and epic melodies. A few years back, the band was nominated for the Best Metal Group/Duo for Canada’s Sirius XM Indies - Independent Music Awards, amongst other reputable Canadian metal bands. Other nominees included Bison B.C, Derelict, Devin Townsend Project and Mares Of Thrace. SCYTHIA delivered their first album Of War in 2010, and released an EP, For The Bear, in 2012.