Jack White and Norah Jones star in this soundtrack sans movie, produced by Danger Mouse and Danielle Luppi. Rome is another example of the range of Danger Mouse’s (Brian Burton’s) sundry styles and talents. Having worked with everyone from Gorillaz, James Mercer, Jay-Z, and on the forthcoming U2 album, it is little surprise the Danger Mouse would produce such an eccentric album as Rome.

Rome lives up to the five-year process it took to craft. The album seeks to create nostalgia to the Italian Spaghetti Westerns of the 1960’s. Although it may not be the perfect tribute to that era, what comes out is even better; something wholly inventive and scenic. The tones are dark and seem to lend to brooding romanticism and misplaced emotions. Jack White’s voice is ghastly and eerie, stumbling along, lost and bittersweet in “Two Against One.” What stands out about White is that his voice posits a feeling of being lost and being unable to articulate all he has to offer.

Norah Jones seems to not quite fit the album upon first listen. After about two or three listens she steals the show. She is sweltering and sardonic on “Season’s Trees” and her vocals carry “Problem Queen.” “Black” is rich with melancholic acoustic guitar and crooning vocals.

Perhaps the best part about Rome is how flexible and questionable the album is. Like any artistic creation, it leaves room for a sequel. Danger Mouse and Danielle Luppi have crafted an imaginative presentation. Even though it does not always hit its theme, it is purely visionary album, which forces listeners to reflect and to craft the album for themselves. 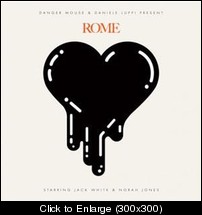