Review: Of An Empire EP

Artist: Of An Empire
Title: Self Titled EP
Genre: Rock/Pop/Indie

It’s a post modern world. It would be easy to assert that, musically at least, nothing new and interesting has or will be created. Of An Empire would beg to differ with that thinking and the Pittsburgh group’s EP is sonic validation. You can name drop influences all day (Brian Jonestown Massacre, Blur, Kings of Leon, The Cure) but that all falls flat if the artist fails to filter those influences and actually create something worth listening to. Of An Empire have crafted an EP that is immediately engaging and vibrant; a must in the age of attention deficit. Camden Leeds’ vocals are frank and emotionally raw without ever being overwrought or angst ridden. His performance on “Days In Between” is exceptional.

Musically, Of An Empire is one ripe vessel. The arrangements are concise, compact, and musically memorable. “Oh Lord” takes hold like a tick. Lead guitarist, Clark Johnson, has perfected the dark yet sparkly tone that propels and compliments tracks like “What You Never Do” and “Chasing Daylight”. If we’re still dropping names, I would put Johnson in league with Live’s Chad Taylor. The rhythm section of drummer, Matt Gray, and bassist, Noland Jenkins, is powerful and compelling. Even on a more subdued offering like “Said it All”, they refuse to wither into the background. This self produced EP is quality over quantity at every turn.

Of An Empire simply does not fail on any front. It rocks. It reflects. But it does not disappoint. It may remind the listener of certain milestones along the musical highway but it never sounds tired or derivative. Available on itunes or through www.ofanempire.com 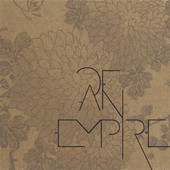