They are not like ordinary bands out there but that is what makes them so great. I kind of see it as them starting their own kind of genre. To me they are a mix between Panic! At the Disco and Snow Patrol. They aren't as down beat at Snow Patrol and not as overwhelming as Panic! At the Disco. Both great bands of coarse. Their lyrics have to do with almost all bands lyrics (relationships) but the way I see it they like to add their own little twists and streaks of humor here and there and then again they aren't afraid to be serious when the time comes. This CD had a very great way of giving you all the aspects of Plain White T's music and then some giving us great hits such as "Hate (I Really Don't Like You)" to "Come Back To Me". The singer's skills are acceptable but I do think there are more talented vocalists out there who's voices seem to be more skilled in posting images in your mind and thoughts. I think it compared well to other albums throughout not only this artist but others as well. It's hard to pin down which songs are the best out of this album considering I can listen to this CD all day and not particularly favor a song but just how much they all have to give you. So check out their cd “Every Second Counts” or you can check them out on myspace or go directly to there site but id give this cd a 3/5 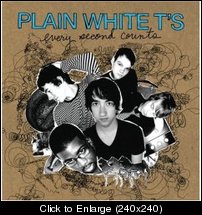