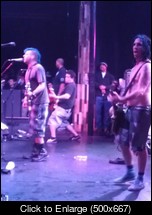 
It was a rainy night in Santa Ana, CA. We were waiting for a short time in the rain for the guest lists to be issued to the box office. As we waited, we noticed the fans, young and older, issuing into the venue. We got more excited the more people we saw. When the guest list was finally issued we rushed in to join everyone.

We headed to the Main Stage to see the first band, Elway. They were fun. They informed the crowd they were from Colorado and even played a few songs about Colorado. They were a great band to watch and listen. Definitely made a fan out of me that night. They were having a great time on the stage and the crowd was having a great time listening to them and rocking out with them. There was one heckler who started to shout out things at the band. The vocalist shot right back at him and he was quiet right away. The crowd clapped. They were on the band’s side. They put on a great show. It was a fun way to start the night.

The second band to come on stage was G.F.P. They were a Skate Punk band. They were raw and real. They were what punk real is. The vocalist was a great front man. He was pumped up and all over the place. The crowd loved it. They played good music and showed that they had good hearts. They had a moment of silence for the tragedy that had occurred that morning (shooting in New Hope, Connecticut). After the moment of respect, they continued to rock out. Their songs were about living fun, being unified and, of course, skateboarding. I kept looking at the bassist who had a Dodgers jersey on and dreads. He looked so familiar. It wasn’t until later when I was at home and on their Facebook page that I realized that he was Tony Alva! Tony Alva is a legendary skateboarder from the Dogtown & Z-boys era, which has a famous documentary. He also started his own skateboard company and record company. He was a huge influence on my skateboarding as a teenager. Knowing that he was a few feet away from me made me remember the night as even better.

We decided to check out the smaller stage. A band called Wrong Beach had just come onto the stage. They were a great punk band. They were a group of older guys showing the older generation what it really meant to rock and have fun with music. They really rocked and I was wondering why these guys were on the small stage and not the main stage. Their mosh pit was filled with people from young teenagers to older adults. They were all unified and dancing around together. This was a great sight to see. This band is a local California band that definitely deserves local support. As I said before, they deserve to be up on the main stage.

We headed back to the main stage and Teenage Bottlerocket was in the middle of their set. They were awesome. They had the whole room full of energy. Their stage presence was so much fun to watch. They were everywhere, dancing around. They were having a party and included the crowd. They had a random guy with a zombie mask come out onto the stage and rock out. The crowd loved him. They definitely got the crowd pumped and ready for NOFX.

Finally, the band everyone had been waiting for, NOFX came onto the stage. The place went crazy when they started to play. People were crowd surfing and throwing themselves at the stage. A few fans were able to run across the front of the stage. Even one guy was able to get onto the stage and rock out next to the band. Security finally was able to catch him and as they were on their way to kick him out, NOFX declared to let him stay. Cans, plastic cups and even shoes were flying. The band played on like this was normal. I started to realize that it may be at a NOFX show. The band gave the crowd the performance they were craving. They didn’t treat the crowd as just a crowd of people. They treated us as friends, equals. They aren’t some better than everyone else band. They are a band of punks just like their fans. They even noticed a guy who they have seen at a majority of their shows. He was a diehard fan. They had security take him backstage so he could have some drinks with them after the show. The crowd clapped. It was nice to see a band give a fan what they deserve. The rest of the show they played a lot of familiar songs and also songs off their new album “Self/Entitled.” My personal favorite song was “Sell Out.” They did do an encore that the crowd had begged for. After they were officially done they threw guitar picks out into the crowd. I heard someone comment, “Someone just ate a guitar pick.” What a wild crowd!

As we were walking out there were two people handing out full length CD’s for the band The Unwanted Guests titled “Punch Line.” They had played on the smaller stage earlier in the evening that we missed. I have listened to this album over and over since the concert. I love it. I am very sorry that I missed their performance. But the CD is great. Album review to come.

Overall it was a great night. All the bands were awesome. The person who booked this show did a great job. Everyone had a blast. And everyone recognized each other as fellow fans. There was so much unity. What a successful show. And if you have a chance to see any of these bands, do it! Also if there are bands you haven’t heard of, check them out. Well worth it.