Upgrade is back bigger, and better than ever after a two month hiatus. In their new location JC Fandango in Anaheim, kids from all over LA and OC waited in line to hear those crazy sounds from the underground. Friday night at Upgrade featured some of the best MC's in the LA scene. The MC Collab Vol. 2 featured a total of 16 MC's going back to back with six DJ's spinning the sickest Drum and Bass I've heard in awhile.
As we walked in the doors, we were welcomed by the heart pounding vibrations of the killer sound system. The bass was buzzing in my head and the energy in that place was amped. There were just too many DJ's and MC's to mention by name, but they were all bringing the heat. 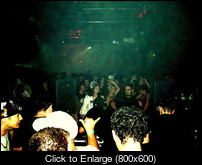 As the temperature rose I made my way backstage and danced with the DJ's and MC's. It was different looking at the party from that point of view, but it was great to see there wasn't a single person standing around. I guess they couldn't resist the bass that DJ Steady was throwin down. As Steady pumped out the tracks the big screen flashed lights that caught my attention. I swear this was the most hilarious thing ever...Mr. Rogers was learning from some little kid how to pop lock and do the moon walk. I was laughing so hard, and found it hard to take my eyes off of the moon walking Mr. Rogers. Nothing like Drum and Bass with a little bit of Mr. Rogers to set the mood right. 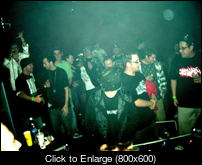 This party was the first time I had ever seen so many MC's performing in one night. While the DJ's spun, there were always at least two MC's on the mic going back and forth, sometimes three. It was a constant flow of sound that fit perfectly together. It was definitely one of my favorite ways to experience a Drum and Bass party.

There were so many people there that night it was almost like a mini rave, but without the glow sticks and candy kids everywhere. MC XYZ, JULZ, BLITZ, J-TEC, and DJ's WHIZARD, JOHNNY V, and DRONE among many others brought out 300 Junglists that night. It looks like UPGRADE might turn into the biggest weekly party in the OC!