-In this Interview with Kramies, we talk about his new E.P., "The European".

In our last interview, the first question I had asked you was "How is everything going today?" and your reply was "Today is very well indeed thank you, I've been packing for a tour which starts tomorrow - I'm a bit of a silly mess getting ready, but I'm excited." back in October 2010. I'd like to follow up with you on that, how did the tour go?


That tour was one of my favorite times ever! It was a short but it was full of excitement. I really got to see and do a lot. The shows I did were in beautiful old buildings, like you could imaging in Ireland. Everyone in Ireland is full of life and have fantastic stories, Just wonderful people. I was actually there promoting a small one-off demo EP I recorded in my coat closet, that was release by Ireland's poltergeist records. These demos are actually what lead to my signing with Hidden Shoal Recordings and became The New EP "The European" that is out November 22nd on Hidden Shoal Recordings

Being in Ireland and playing these song live in such a beautiful unique setting really helped structure the old world feel that I adore. Th something haunting about old lands, cobblestone ruins and history that really influence me and that tour really comes th in the new EP.

I asked you about a year ago, "What do you think your next step in your musical career is? " and you answered "Oh that's a wondrous question. It will be a fantastic step whatever it may be! - I will be happy just to grow as a singer/songwriter." What are some of the changed that happened in the last year? Has your music matured, Played with any other new artists? act?

The biggest and best change is that I signed on to the fabulous Hidden Shoal Recordings and that truly has been a fantastic new development. Having a label like HSR on your side really lets you focus on writing and recording while they work through the details. They are a the nicest group of gentlemen who are extremely talented. As far as the music, I just always hope with age, my music has grown and matured. I believe the more I experience in life the more it will come through.

Played with any other new artists?

I fortunately got to plays shows on the last mini tour with artists like my friends Neassa Doherty & Simon Dowling who great indie folk songwriters and with bands like You Kiss By The Book, Walpurgis Family, Land Lovers & Drunken Boats. All great bands and songwriters based in and around Ireland.

Who did your recording and where was The European recorded?

"The European" was recorded in Ohio with producer Todd Tobias (Guided By Voices, Robert Pollard, Circus Devils) and Musician David Paoluccci. This has been the recording team for the last 2 albums so it felt comfortable and it is nice to leave the Colorado mountains to travel home and to work with Todd in his studio. It adds a sort of nostalgia to things that seems to slow time.

Whats the official release date and where can everyone get it?

"The European" will be released on Hidden Shoal Recordings November 22nd.

The European EP will be available digitally as well as a numbered limited edition of 100 cd postcards with artwork by Australian designer and illustrator Stuart Medley. CD Pre-orders are available now through the Hidden Shoal Store ahead of the official release on the 22nd of November. All pre-orders come with an immediate download of the album. The first single from the EP, Ã¢Â€Â˜Coal Miners Executive ClubÃ¢Â€Â™, is also available for free download. Here is a link with all the info music.hiddenshoal.com/archive/postcard-cd-pre-orders-for-kramies-the-european/
The coolest part is that the first 100 come with an actual Kramies/HSR postcard !!

What is one of your favorite songs on your new CD?

That's always a hard one to answer. I really feel close to the title track "The European" and I love the simplicity to the ending track "Antiquarian Days" Those 2 really captured something for me.

You have a new single called "Coal Miners Executive Club", is this song off of your new album or is this a new song that will be released on a new album in the near future?

Coal Miners Executive Club is on the new EP. Its the biggest sounding song on "The European"
I loved recording this song because it has a ton of instruments and synths and really swells in and out with sound. Coal Miners is different the the other 3 songs and breaks up the EP but at the same time fits right in with the story the songs seem to create in The European. "Coal Miners Executive Club" can be downloaded for free here agora.hiddenshoal.com/index.php?main_page=product_info&cPath=51&products_id=185


The name makes me really interested in this song, what does it mean and what is this this song about?

At the time I was writing it, theres something dark I imagine when I thought of Coal Miners. I was imaging coal miners marching as in a parade into the mines in the early hours of the morning. Its a job a lot like a Pirate Ship I would imaging, with a captain and a crew. There is a positive yet desperate longing in the words and in the music that just seemed to come out. A feeling of moving forward, like digging . I'm never really sure what I write about while its happening nor do I know where it comes from but after a while it takes shape and makes a bit more sense.

With all this new music, do you have any tours planned?

There are a few things in the works & I do plan to do a few shows overseas and a small acoustic tour. As of right now & through the mountain winter im starting to write and demo my next single and EP. That sounds pleasing to me to write and stay still over the next few months. Theres nothing like hibernating and writing through holidays and snow drift windows.

Thanks for doing another interview with Big Smile Magazine, It's always a pleasure. Do you have any last words for your fans reading this interview?

Thank You! I Love Big Smile Magazine ! Check out my new EP "The European" and all the other great artists on Hidden Shoal Recordings

Here are just a few . music.hiddenshoal.com/archive/postcard-cd-pre-orders-for-kramies-the-european/ 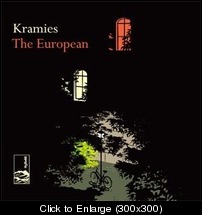