Late Registration, Kanye West's sop#re album released only a year after his successful debut album College Dropout (2004) doesn't disappoint with this release. One of my favorite Kanye album comes packed with excellent production mainly done by himself and with help from Just Blaze and Jon Brion. What sets this album apart from his debut release, College Dropout (2004), is the samples. Using a variety of soul, jazz, and blues samples. This is unique to Kanye's production style proving that he can be a Rapper/Producer and do it very well; Something a lot of artists don't do these days in the Hip Hop game. Also he shows that he can gather up all star artists to be on his album; featuring Jay-Z, Lupe Fiasco, Jamie Foxx, The Game, and Common; can't get any better than those artists!

Also he steps out the box and reaches out to Adam Levine from Maroon 5, who is featured on Heard 'Em Say (Track 2). Some of the tracks that had heavy radio play were Gold Digger Ft. Jamie Foxx (Track 5) which samples Ray Charles's I Got A Woman pretty darn well. Some other songs that stood out to me is Crack Music Ft. The Game (Track 8); this song is unique in the way that Kanye and Game use Crack as a metaphor for Hip-Hop how record labels are selling the music to people and how people are addicted and want more of it. Another honorable mention is Diamonds From Sierra Leone (Remix) Ft. Jay-Z (Track 13) which talks about the Roc-A-Fella relation that Kanye has with the label and Jay-Z; an additional note about this song is it expresses the concern about blood diamonds in Africa. Overall, this album is very good; it shows off Kanye's lyrical and production ability. In my opinion, Kanye is one of the best rappers and producers out right now. 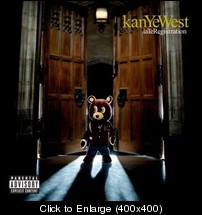