How is everything going today?
We are doing great, how are you? Merry Christmas by the way.

What are your names and what do you each play in the band?
Matt Lloyd- guitar/vox, Lauren HanSTICK-vocals, Nic Byron-bass, Alex Horton-keys

Do you have a CD out right now? Tell us a little about it.
We actually just finished up recording our debut EP. It is in the mixing stages right now and we are hoping to have it released in late Jan. It will have 7 songs on it, very excited for everyone to hear.

What are some of your up coming shows?
We are playing Dec. 29th at The Rutledge and Dec 31st at Hotel Indigo, both in Nashville.

How did you guys start JSYH?
I (Matt) started the band with the original singer in Sept 2010. Nic is my roommate who has played with me in other bands and he has been with us since the first show as well. Lauren replaced our original singer in June 2011 and Alex came on in July 2011. So this line up is set in stone now and we all get along great.

Where did your band name come from?
The band name actually came from a song I (Matt) was writing. The song has never been finished, but that line stuck out and we ended up using it as the band name. It's kinda long, but people seem to remember it whether they like the name or not haha.

What CD has been spinning a lot lately for you guys?
All four of us listen to very different types of music but some that has been playing are... Jimmyeatworld, murder by death, Marc Broussard, Carrie Underwood, Christina Perry, Every Time I Die. How's that for eclectic.

If you got the chance to have Snoop Dogg quest appear on one of your songs would you take it and what would you have him sing on what song?
It would be very hard to pass up, but he's not one of our favorites. But prob on "Time to Fly" or "Mexico"

What are you guys websites and how can everyone find your music?
www.jumpstartyourheartband.com

Thanks so much for doing an interview with us, any last words?
please add us on Facebook, link is on our website and be looking out for our self titled debut EP late Jan 2012! Thanks! 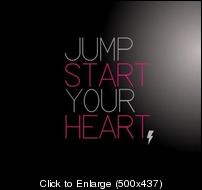