Jack Johnson displays his classic folksy, laid-back, and breezy songs best on 2009’s “En Concert.” The album is compiled of 20 Johnson favorites recorded during his “Sleep Through the Static World Tour.” The album gets right into the groove with the crowd cheering as Johnson begins singing “Belle” in French before leading into one of the fan-favorites “Banana Pancakes.” The album drifts on to other hits such as “Flake” “Bubble Toes” and “Sitting Waiting Wishing.”

The real highlights of the album come when Johnson lets others take a stab at singing; others seem to compliment his vocals and mesh with his style. “Country Road” is a delight with guest vocalist Paula Fuga stealing the show with her bottomless and consuming voice. Pearl Jam’s Eddie Vedder’s gruff voice leads off “Constellations,” which is easily the best track on the album. As he begins “The light was leaving in the west it was blue, the children’s laughter sang,” the crowd begins to cheer and applaud like crazy, letting Vedder know that he has still got it. This point on the album puts the listener at the show. Everyone has been to a show where a surprise artist comes on stage and the energy at the show rises. It is such a pleasure to hear his voice meld with Johnson’s smooth voice as they sing together as one. The track comes together beautifully and serves as a great pick up right in the middle of the album.

“En Concert” is not just noteworthy because of Johnson sings beachy songs about sitting beneath mango trees and eating banana pancakes that remind you of beach cruisers and flip-flops. Johnson’s casual style and laid-back attitude set the tone of the show. Jack Johnson’s style and aura are just as important as the music he makes. If he went on stage in a leather jacket with a Mohawk, his show would be completely different. His style and his attitude are clearly defined…and hey, it works.

The album features a commemorative tour booklet, which showcases where in the world each song was played. It also features nice scenic photos that are typical to Jack Johnson; surf, sun, and sand. The deluxe edition of the album comes with a live DVD which is a cool bonus because it has different songs or different versions of the songs featured on the CD. All the procedures from “En Concert” go to Kokua Hawaii Foundation and Johnson Ohana Charitable Foundation, which support environmental, music, and art education. “En Concert” is an ear-pleasing little ditty. It is nothing profound or groundbreaking, just pure, relaxing melodies…and that is exactly what we want from Jack Johnson. 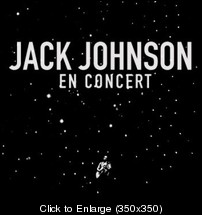