This event took place at the beautiful Heinz Hall on 600 Penn Ave in Pittsburgh, Pennsylvania. Heinz Hall has been around since the 70’s, over 45 years, and has held events from some of the greatest artists and musicians like Bruce Springsteen, Trey Anastasio, guitarist for Phish, James Taylor and The Dixie Chicks (to name a few). The building itself has been standing much longer though dating back to the 1800's and has had many renovations over the years. It was dedicated in 1971 as Heinz Hall. The 2,675 seat theater was sold-out and filled to the brim on the one-of-a-kind evening that was about to take place.

As we walked into this historical building for the first time, I did not expect to be wowed like I was. The first level was filled with chatter, the band's merchandise table and a few concession stands to grab a little snack. Each floor had its share of a beautifully lit and decorated bar(s) as well. We grabbed a coffee, snacks and a Hanson - String Theory pin then headed to our seats. We walked up the grand staircases wide steps laced with timeless red carpet, brass railings and ceilings that seemed to touch the sky. The stairs lead us to another staircase, and then another. Each flight we traveled upwards became smaller and smaller, a good indication we were getting closer to the top. Finally, we reached the Gallery and were greeted by an usher that showed us to our seats. As we found our seats and sat down, we had a view of everything. The stage that was about to hold 100 musicians and a sea of fans from left to right left us in excitement.

Slowly each person from the Pittsburgh Symphony Orchestra walked onto the stage, took their seat and picked up their instrument. As the seats started to fill up the fans start to grow louder. An anxious feeling fell over the building. The final few musicians from the symphony orchestra took their seats and positioned their instruments in anticipation to perform a show of a lifetime. Conductor Andrès Franco stepped onto the stage as the chatter slowly calmed down to a whisper. Everyone drew his or her attention to Andrès as he announced The Pittsburgh Symphony Orchestra and Hanson. The building, from wall to wall, was filled with excited fans and you could feel the electricity flowing... Hanson took the stage.

As the band walked onto the stage, the fans let out a few more hoots and screams before settling down for the show to begin. Zac Hanson initially stated that the songs and show they were about to play would be different than what the fans were used to. Taylor Hanson chimed in stating the show would be one-of-a-kind and how happy and excited they were to be there. The three brothers were honored to be celebrating 26 years of making music by playing with the Pittsburgh Symphony Orchestra as Isaac Hanson excitedly reminded the lifetime fans in the audience. Hanson then jumped right into playing “Reaching For The Sky, Part 1” to start the String Theory show. The guys seemed to not be able to contain their excitement on stage. Taylor was on piano, for the first few songs and couldn’t sit long enough before he was standing up and feet moving to the beat. Isaac was on lead guitar, front and center, and co-fronted the band in most of the songs with the perfect amount of energy to stand out from the powerful sounds coming from the symphony orchestra behind him. Zac on drums played phenomenally, leading the band and it almost felt like he was helping Andrès lead the symphony orchestra as he played a perfect balance to where he was not drowned out by the almost 100 person symphony orchestra and yet was heard with pronunciation. He must have changed drumsticks for every song to get different sounds from his drum set. The combination of an symphony orchestra and band was nothing I had heard before and would for sure want to hear again.

The Pittsburgh Symphony Orchestra was lead by Andrès Franco. His arms conducted with force, yet elegance. He controlled every swipe of the violin strings and every horn note like a steam locomotive perfectly controlling each wheel to move synchronized to gain momentum. With every song, all of the musicians seemed to get more comfortable performing as one united team. I felt like the fans didn’t know 100% what to expect from such a unique event like this, but as the show progressed, everyone got more comfortable in the soft red velvet fold-up seats. Then unexpectedly, and a bit abrupt, it was time for an intermission. This is the first concert that I had been to where there was an intermission. I didn’t think I would like it but, I was pleasantly surprised.

During the intermission, we were able to walk around, see some new parts of the building and prep for the next portion of the event. I can only imagine how playing a 24 song set could be pretty intense and exhausting for any musician without a break. A delightful ring of a bell announced the intermission was coming to an end. Everyone headed back to their seats. This time the fans were louder and more excited, chatting, yelling and anxious to get started again. As everyone returned to the stage I was impressed to watch everyone know exactly where his or her instruments were, where to sit and exactly what page of music sheets to be on. Precision at its finest! 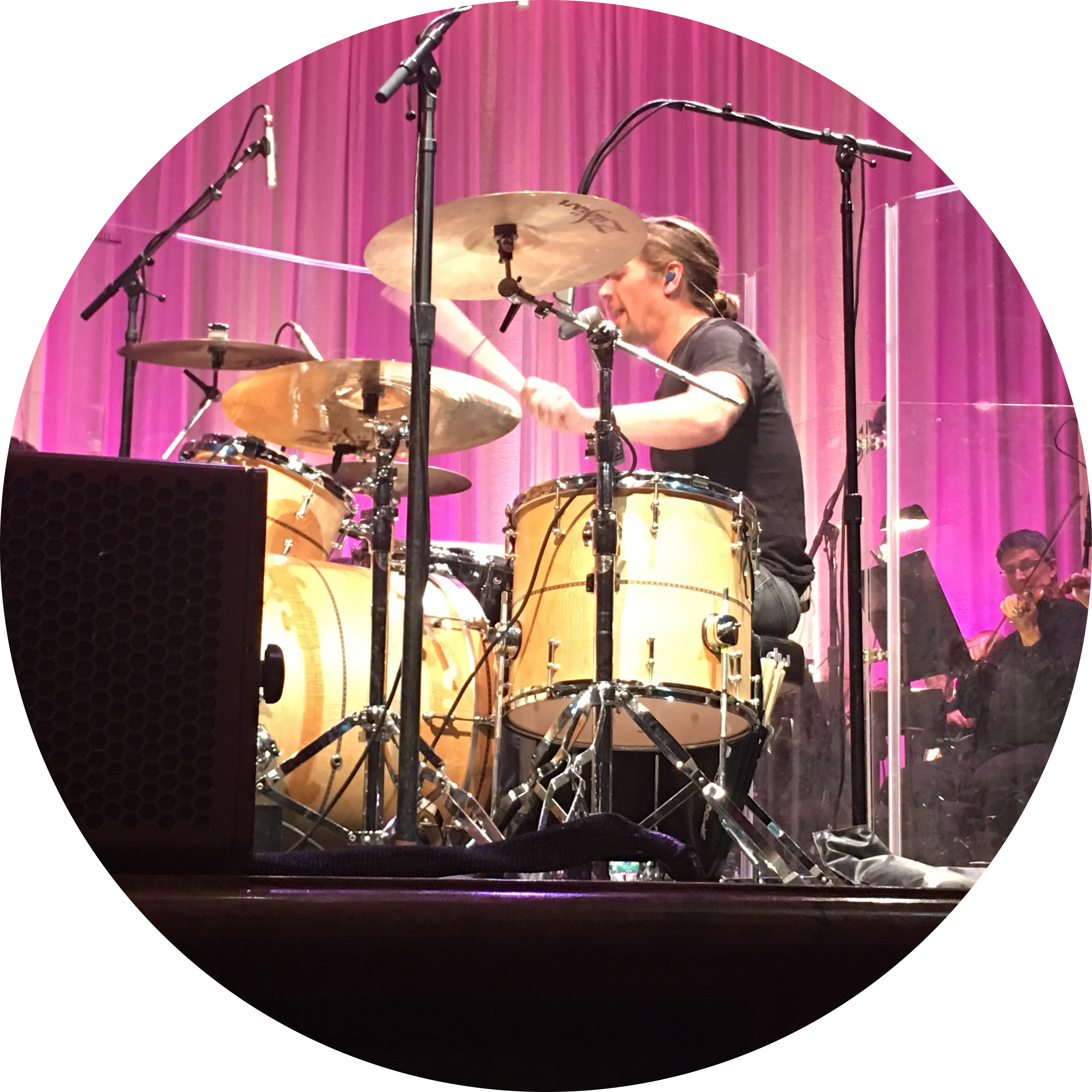 Hanson started the second set with the song “Reaching For The Sky Part 2” and had even more energy than before. You can feel the power and excitement Hanson had as they were celebrating 26 years of music together. To them, this was new to be performing with such a prestige symphony orchestra. The energy was high as feet were moving and hands were clapping. As they got to the song “You Can't Stop Us” (it was my first time hearing this song) I instantly felt drawn into the song lyrically. I really enjoyed the high energy it brought out of the band. What made this song really get me excited was it being a faster-paced song and harder hitting rock anthems. I really felt like the symphony orchestra was waiting for a moment like this to let loose and rock out. This moment was all it took for every single one of them on stage to dive in, head first, and own the song. For a short moment, Hanson and the symphony orchestra become one and it was badass. As the song ended, Isaac said, “That was fun!” Hell yes, it was! It left me wanting more. Everyone continued to perform beautifully as the night was winding down with a few more songs. Towards the end of the evening, time seemed to slow down as no-one was ready to go home, but, at the same time, excited to know they were a part of Hanson’s String Theory playing at Heinz Hall and performing with The Pittsburgh Symphony Orchestra. It seemed bittersweet.

Overall, this event left a sweet taste in my mouth with the combination of the Heinz Hall being so beautiful, the hundreds of dedicated fans, the 3 brothers dedicated to doing what they love and an amazing symphony orchestra. I look forward to visiting Heinz Hall again and the next time Hanson comes through Pittsburgh.

This tour marks 26 years of making music for Hanson. That’s a huge accomplishment to not only make music that long, but to stay together as an original band, tour and support third world countries in need. I have personally been on one of their “walks”(https://hanson.net/TakeTheWalk) at the House of Blues in Anaheim, CA and it was a great thing to be a part of. It’s time to see past the Mmmbop and recognize them for so much more. Isaac said, “We are happy to be celebrating 26 years of music and we can’t wait for the next 26.” What better time than now to check out Hanson and all they do: www.Hanson.Net

24. This Time Around - Vocals Only