Drums, feedback, and an explosion of a voice and guitar: "Show me your hands!" This is the Gaslight Anthem's opening to the title song of their Sabot Productions EP "Senor and the Queen", a brilliant four-song compilation of pure joy, pure soul, and pure punk rock. It's both an album you can pogo or mosh to, depending on your bag (I tend to do both) and one you can sit and really listen to, for it's poetic, compelling lyrics, and its soulful vision of America. Frontman/songwriter Brian Fallon creates a powerful vision of his native New Jersey in his songs, a city of weary blue collar punks listening to "Thunder Road", searching for redemption, and begging their girlfriends for their lives.

The aforementioned title song at first seems like it'll be a dark hardcore song, but then turns into Fallon's own plea to a girl: "I wanna know how you dance pretty baby, by the light of the moon/Do you carry your lovers around in your heart like a tomb with a view?". It's a mix of the Boss, but also Social Distortion, Against Me, and 50s rockabilly. There's even a little Sam Cooke in Fallon's cigarette rasp that launches into howls of love and pain. "Wherefore Art Thou, Elvis?" shows Fallon's progression as a songwriter, with soft backing vocals and a gorgeous chorus: "I need a Cadillac ride, I need a soft summer night/Say a prayer for my soul Senorita".

The record ramps up with "Say I Wont (Recognize)", both a genuine country hoedown and a punk party song, Fallon tossing off great lines even when the party slows down and it stops being fun: "So come on before we get older/And that could happen any one of these nights." And it reaches it's apex, maybe with "Blue Jeans and White T-Shirts", maybe the best song Fallon's written and a beautiful piece of music. The party's over, and it's time to think it all over, with a quiet electric guitar and elegiac keys in the back. Fallon sings, genuinely sings, in a haunted rasp that's both celebratory and contemplative. "We are the boys of little Eden/We are the heart of Saturday nights/We sing with our heroes, thirty three rounds per minute/We're never going home til the sun says we're finished." It's a song that has great joy to it, an anthem, but a bottomless melancholy as well, the hangover that reminds you how great it's been.

The Gaslight Anthem have released three albums (two of them great), but this might be the best thing they ever released. It encapsulates their genuine vision, their great joy, and their rock n roll spirit in four songs and eleven minutes. These are songs for the big, loud nights, and the quiet ones as well. 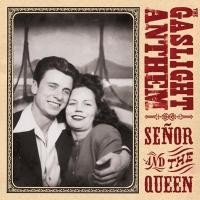