After almost a decade since releasing his debut solo album The Chronic, fans and critics alike were doubting if Dr. Dre could produce and release another solid and classic album like The Chronic which was released in 1992. Almost a decade later Dr. Dre along with a team of solid producers such as; Scott Storch and Mel Man delivered a West Coast Classic album. Featuring hip-hop stars like Snoop Dogg, Eminem, Kurupt, Nate Dogg; Dr. Dre would prove all the critics wrong and would give fans what they had been waiting for.

Included In this album are Classics such as the The Next Episode featuring Snoop Dogg, Kurupt and Nate Dogg (Track 11), Still D.R.E. Featuring Snoop Dogg (Track 4) Forget About Dre Featuring Eminem (Track 10). These songs are sure to get a party started and songs everyone will know the words to. My all time favorite of the album What's the Difference Featuring Xzibit and Eminem (Track 7). This album is a must if you are a Hip-Hop fanatic. 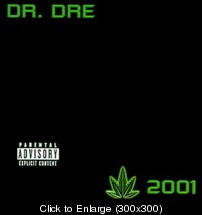