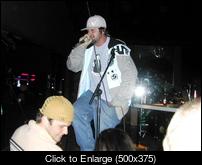 Hip Hop is not dead! It is alive and kickin with some fat beats and crazy rhymes at Club Reak @ Leonardo's. Thursday night brought out the best local MC's spittin original rhymes from a variety of MC crews. When I arrived MC artist Moses pumped up the crowd and represented with shout outs to the West Coast "714!" I think Moses brought his own fan club, because people were singing along to his song "Perfect Blend." He had an electrifying stage presence that drew the crowd into his performance. The DJ provided hard-hitting hip hop beats, which was the perfect compliment to Moses' smooth flow. "I would describe my style as crafted with a swagger, making it catchy and marketable," explains Moses.

When it came time for a break, I was surprised to see an impromptu MC battle outside on the patio, complete with a beat boxing crowd. It looked like they were warming up for the MC Battle at the end of the night . I have to say that things got a little steamy in that circle of people. These guys were not holding back, and the insults were flying back and forth. As more people trickled outside, the occasional "OHHHH!!" from the small crowd that gathered around the group of battling MC's drew in more people. I was impressed by the raw talent that was there droppin mad rhymes on the patio. That circle of battlers showed me that they were truly there for the love of the music!

"Goood" was the next MC crew to hit the stage with some old school beats and simple rhymes. During their set it gave me that laid back, summer BBQ kind of feeling. They started to switch it up with some more urban sounding lyrics and beats. I found myself bobbin my head to the beat during their set of clever rhymes. They closed the set up with some oldies, which made me feel all nostalgic and in the "grab a chair and rest your feet mood." 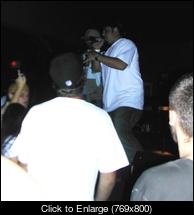 The crowd started hitting the stage when MC crew "Dead Poets Society" began their performance. I would definitely label them as a crowd pleasing group. DPS reminded me of Cypress Hill in both their background music selection and their rhyming styles. The trio of MC's had well crafted lyrics and perfect execution. Although they lacked the stage presence of Moses, I have to say this duo was one of my favorite performances of the night.

The last performance of the night before the MC Battle was the crowd pumping "Technicali." Walking bass lines, and mad scratching by the DJ set up an intensity on the stage for the crowd. Technicali's use of the stage made him interesting to watch, as a matter of fact, I couldn't keep my eyes off of him. He commanded the crowds attention with his every step as he followed the beat up with intense lyrics. This performance should have had the label "Parental Discretion Advised" on the flyer. 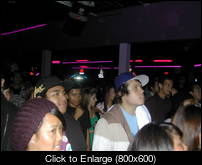 The heat started to rise when it came time for the MC's to battle for the already pumped crowd. There were quite a few MC's that participated in the battle including; Han Solo, Cosmo, L1, Pauls, and Woodrow. These MC's went B2B battling it out in front of the crowd while the DJ provided some simple hip hop beats to keep the tempo. It reminded me of a political debate in the sense that each person just kept taking stabs at each other. Jokes and ill rhymes were flying across that stage, while the crowd cheered on their favorite. Pauls was throwing down some crazy good lyrics that kept the crowd wanting more, which is why he was my favorite of the MC Battle.

The night provided a variety of hip hop sounds and some interesting lyrics by the MC's. The large venue and quality of talent makes Club Reak @ Leonardo's a show worth checking out. "I see this place as a new, but growing establishment in the OC. There are always gonna be local spots where you can listen to hip hop, but this is a place where you can get that true underground hip hop sound," says Moses. For more information on Moses and his new album "Perfect Blend" you can visit his myspace page at www.myspace.com/micmoses