Circa Survive - On Letting Go

So here we are. 25 months after Juturna's debut, an album that most would consider a gift-wrapped surprise to the "experimental/prog rock" genre, an album, no matter the measure of its atmospherics, screamed potential and even more so a sense of modesty. Well at last, we get to find out what the band have been up to, and apparently they've been up to a lot. "On Letting Go" teeters on epic. A balance between the subdued, yet awesomely crafted (Kicking Your Crosses Down / The Greatest Lie) to the punch in the face, no holds barred unexpected (Semi Constructive Criticism / Mandala). With a lineup so versatile as talented, mediocrity and monotony is simply unheard of this is the type of combination that guarantees an album that just delivers especially at a consistent level. The more prevalent presence of Frangicetto & Ekstrom on multiple outings (In The Morning and Amazing / The Difference Between...), is a key component to what makes OLG as being a more mature and defined piece of work. Green's vocals and songwriting capabilities also can't be denied here: "If blood is thicker than water, then you'll drown quicker than we intended. And you'll know where you can find us in the end, so we can begin again." Also, hats off to Brian McTernan for engineering some of the most amazing production work heard in recent years. While most clean-cut, polished albums are frowned upon, the sharpness of OLG is a massive compliment to the art that Circa has created here. The only thing worse than overproduction is underproduction. In a nutshell it's anyone’s guess where the band chooses to go from this point, already with 2 impressive albums under their belt, Circa has a wide, tasteful palette to expand from and they have yet again raised the bar to an even higher standard so pick up there new cd its pretty amazing! 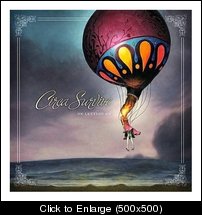