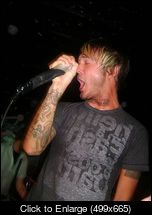 Most people know Craig Owens from the hardcore/screamo band Chiodos, but he also has another band that in no way shape or form is a side project. This band is called Cinematic Sunrise. When watching interviews you can tell that Craig holds this band very close to his heart, and he just wants to grab the same old fans from Chiodos, but also reach out to a few new ones. Cinematic Sunrise has just dropped their first EP, so it was obvious that they would go on tour. I had the pleasure of getting to see one of these few shows. 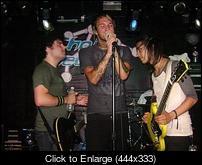 The show also featured My American Heart and Daphne Loves Derby who both played very entertaining sets. Cinematic Sunrise came out with a lot of power and energy; this energy got the crowd going even before the music started. They played all 6 tracks off the album as well as some unheard music for their upcoming full length album. They had a comical feel to their set that made things fun. The band was also joined by Vic Fuentes from Pierce the Veil, who played rhythm guitar for the band. I felt the end of the show was a little anticlimactic, but the overall performance was amazing. I would really recommend picking up their new EP and try to see them the next time they stop in town.