How did you come up with your band name? Noah came up with it, and it just kind of stuck.

What venue has been the best to play at? All the House of Blues we've played at have been awesome, but I'd say that the best sound we've ever gotten at a club was at a place called The Asylum in Fort Worth, Texas.

What city or area has been the best place to play? I'd say the Midwest; states like Iowa, Illinois and then Ohio and New York have all been great.

Where was your best show? Our album release party was a lot of fun; it was great to be able to show our appreciation to our fans for getting us this far.

What makes a show the best? Usually the kind of vibe we get on stage, the quality of our performance, and how well we connect with the crowd while playing.

Who do you one day want to play a show with or open for? Black Sabbath, or Slayer. There are lots of other bands.

What makes you strive to be heard? It's a great feeling to be able to share your art with people, the more the better as far as we're concerned.

Why would anyone want to hear your music? We're not trying to reinvent the whole genre, we just try to write good songs, and play them the best we can. If you like heavy music, or even if you don't, but you have an open mind, you should check us out.

What brought your band together? All of us we're looking to start a band, its really coincidence that we happened to meet up through a network of friends. I (Kyle) met Noah when he lived in Oklahoma City, visiting friends. I was jamming with my friend Allen who plays bass, and he introduced me to Noah. I didn't see him for about a year, but I heard he moved out to California, after that we joined up and started recording songs. We randomly met up with all the other guys after that.

What is the best thing about being your band? We're friends first, and band mates second. The music is really just an excuse for us to hang out more without making our girlfriends mad, hehe.

Do you have any advice to starting bands? Find out everything you can do to further your band. Ask other bands what they did to get where they are, read books on music, and explore every facet of music that interests you.

Any funny or interesting stories? We played a show in San Diego with our friends Stemm back in January. Before the show started there was this crazy homeless guy across the street yelling at everyone standing in line, and he was getting all crazy. Out of nowhere he starts setting his shoes on fire, and then proceeded to put his burning shoes out on his face. Not long after that, a bunch of cops came around the corner, pepper sprayed him and stuck a drug dog on him. It was one of the funniest things I've ever seen.

What do you think about UFOs? I saw one about a year ago at my last apartment, it was doing circles and dive bombs for like 15 minutes, weird stuff. Paradigm in Entropy just dropped last month, how long did it take to make the album? It took us a month solid of recording out in Ohio.

Where can we get it? You can get it at most Best Buy's, Tower records and Sam Goody and places like that. You can also get it off CdNow, Amazon, and our website. 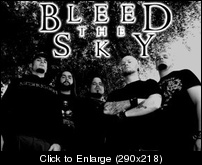