Avenged Sevenfold: Hail to the King

I guess Rob Flynn didn’t get it. It’s right there in the title and everything. Hail to the King; the phrase itself denotes paying homage to the royal ones. Did Mr. Flynn expect Avenged Sevenfold to create an album that acknowledges the fathers and grandfathers of heavy music without incorporating some of that sonic palette that was so influential to them? Sure, the hat is tipped heavily towards the idols. It’s true that the DNA of Metallica, Sabbath, Megadeth, and Guns N Roses runs deep (and very near the surface) on this newest release from Avenged Sevenfold. The idea here was to scale back the production and layers and strip the machine down to the bare metal. Gone, for now, are the heavy keyboards, choirs, and orchestration that confused some fans on A7X’s last album, 2010’s Nightmare. Here, for now, are heavy grooves, wailing and chunking guitars, unprocessed vocals, and just a little chanting and ominous whispering for good measure. Hail to the King is just a powerful rock album, and a very good one at that. Avenged Sevenfold have flummoxed their fan base regularly with stylistic changes and musical experimentation but have consistently delivered interesting albums. Hail to the King is a flat out rocker that pays respects to the ones that have gone before. 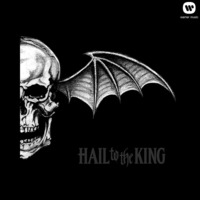