Why do you play music? It's something all of us in the band love to do very much.

Where do you wish for your band to be in 5 years? Hopefully taking ADD as far as we can. And being able to do the band full time.

Where have you been playing lately and how has your response been? Well about a month of so ago, we got back from tour. A tour that Tyler put together 2 weeks prior to it happening after the original tour plans fell through. But even with it being so last minute, it was a lot of fun. And all the shows were really good. The kids responded very well. Good times.

What you are saying thru your music? As far as the lyrics, Vigil writes all of them. He writes a lot about staying true to what you believe in, and to yourself. Their are a lot of things that bands write about now days that are just done way to much, i.e. girls/girlfriend/problems with them ect. To be honest all of that stuff is a bum out. It's like ok we get it all ready, you hate your girlfriend!


When was your band formed? Wow, that's kind of tough. There were so many member changes at the beginning. I don't know if I remember them all. The band was formed I think in late 2003. But we were not a really serious band until late 2004.


What do you think its going to take to get there? A LOT OF HARD WORK!

Where have you been playing lately and how has your response been? Home shows which are always fun. Arizona shows(Havasu/Kingman) rule always, because of our friends band "The Hope of Change" is from Havasu, and we always try to play with each other. Most of our shows recently have all been excellent.

What do you want to see happen thru music in the future? Less bands diluting them selves to reach a certain goal.


What brought your band together? Fun, the love of music, and friendship. 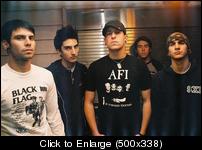