This interview was done at Chain Reaction, just before they went to Europe and broke-up.

Are there any particular bands that have influenced your music? A lot of us really like The Beetles, The Cure, Radiohead, Smashing Pumpkins, Led Zeppelin, The Who, Pink Floyd, Fugazi, stuff like that.

Have either of you been in any other bands? We have, umm most of them are probably bands that you've never heard of, I know my old bands where. Well I (Josh F) was in one band you might of heard of called Zao but other than that, we played in lots of bands.

When was your first show? Our first show was at St. Vincent college in Latrobe, Pennsylvania. We played 6 songs and I don't think we where very good. We borrowed A lot of equipment too, because our bass player didn't have an amp and all he had was this terrible bass that he bought for $80 with nails holding the tuning heads in, big nails that stuck out like 2 inches, yeah it was ghetto.

What inspires most of your lyrics? Life in general, you know, life love and regret. Guilt about girls.

Do you have any advice for starting bands? Play lots of shows, write good songs, and don't suck. Stay in college.

How's your response on this tour been? Pretty good overall, not to bad, can't complain.

Any funny or interesting stories? We all got in a fight last tour with these three little drunk red necks in Tennessee. They where making fun of us and calling us names. We almost got in this huge rumble but the cops came. That's probably the only thing from the last couple of tours.

What do you want to see happen through music in the future? Just as long as music touches people and people care about music and music moves people that's really all that matters.

What would you say to yourself if you met yourself when you where ten? Well this kind of what I (Josh F ) wanted to do when I was ten so I don't think I would have any advice for myself. I'd (Brett) tell myself to make more friends. Not that I dislike the friends I have, it was just that I was shy, and maybe if I would have talked to more people, I have no clue what would have happened any better. Maybe I wouldn't have told my self that. Might of told myself to start playing hockey than because I didn't start until I was thirteen and I wish I had started earlier. That's it! I would have told my self to start playing hockey.

Do you guys represent any religion? We represent multiple religions and multiple non religions as individuals. As a band we represent no faith or agenda besides playing rock music.

What do you think about UFOs? I (Josh F ) believe, I do. There's probably aliens somewhere out there. it's possible there aren't, but I (Brett) think it would be a bit egotistical to believe that we are the highest form of life in the universe with all those other galaxies that there isn't possibly something out there in some way shape or form.

Where your parents supportive of your music growing up? They supported what ever I wanted to do. My parents where very easy going on me.

What do you do to pass time on the road? We basically play playstation all day long. Talk to our women. We listen to our ipods for sure. Nothing to exciting that's for sure.

Any advice for bands going on tour? Make lots of friends, meet some promoters and people that can get you shows. 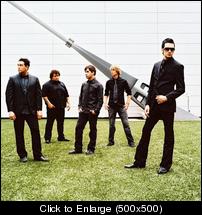