How did you come up with your name, and what does it mean? We were looking for something short and kind of catchy, we figured a girls name would be the best way to go. It means A Gift without Limits.

What other bands have you been in? Passing Through Kansas, Amfmhm, Device, The Tuxedos, Pointless, It Ends Today, Entransit, the list goes on but we will stop there.

What venue would you like to play? Probably the Glasshouse in Pomona.

What venue has been the best to play? Chain Reaction is always amazing, we absolutely love the home town crowd. It’s so intimate, where our fans are right there.

Where was your best show? Surprisingly enough it was at Hogue Barmichaels. (yeah I know, hard to believe)

Who do you want to play a show with? Right now with the way we are writing, I would have to say Anberlin. Those guys are so passionate and have so much energy.

What you are saying thru your music? We try to write music where it doesn’t matter what we say, it’s all about what people hear. We want to write music that means one thing to us, but anyone can relate to it and possibly even take it a completely different direction.

What brought your band together? Myspace, we all met through classifieds on myspace.

When was your band formed? It’s still forming, we just got our new drummer Mike, about 2 months ago, our first show was May 9th, 2005, so we are still a very new band with a lot on our mind.

Why was your band formed? To play and write music the escape the boredom that life holds sometimes.

Where do you wish for your band to be in 5 years? We hope to be on a major tour, playing in font of people who love our music and are just excited to see us playing. We also hope to be playing for our 4th straight Warped Tour by then.

What do you think it’s going to take to get there? We think we are on the right pace. Hopefully if everything goes right we will be playing a couple dates on Warped Tour this year and by summer be on our first full US tour.

Where have you been playing lately and how has your response been? We have been only played OC and LA clubs so far, the response has been better then we could ever expect, our last 4 shows at Chain has been completely sold out. None of our other bands have been able to do that.

Do you have any advice to starting bands? Well considering we are just a starting band…Find the right people, who are in music for the right reason and let your passion show through.

What is the best thing about music? The feeling of accomplishment when someone tells you, this is an amazing song.

What is the worst thing about music? The time you are away from your friends and family.

What inspires you to play? The people that come to our shows and support us, when we see kids smiling and singing along to our songs, there is nothing better.

What were some of your favorite bands growing up? We are still growing up but, Green Day, The Clash, The Ramones, Boston, Journey, the list honestly goes on.

Tell me about your latest album! “…And it Rained Machines” is our first album, it was self-released just on smartpunk.com and actually caught the attention of World Artist Records, who are going to be re-releasing it IN STORES sometime in May, so check your local stores!

How long did you wait to make the album? It seemed like it took forever, there was a lot going on and Bret, (drummer of Fiore) who was recording us was a busy man. Not to mention getting the money together by our self to record, mix, master, and press our own cd was not an easy task to complete. But after all was done it felt amazing to have an actual pressed, professional looking cd.

What do you guys think about it? We are extremely proud and it is a great point to look back on and think, “We did that after only being a band for 6 months.”

Where can we get it? As of right now the only place to get it is smartpunk.com and at our shows, but sometime around May, it should be in stores like: Bionic, Target, Tower, Best Buy, Circuit City, Sam Goody, and a few other spots.

What do you want people to get out of listening to "…And it Rained Machines"? We hope for them to like and say when are you guys going to put out another cd.

What did your fans say about it? So far the feedback has been absolutely flattering. We have heard nothing but good things. So anyone who doesn’t like us, we are on myspace, lets hear it.

Any advice for anyone thinking about making a CD? Take your time and yes it is worth it to mix and master it. We would bring a rough mix home after every recording session and come back the next day and change stuff, it can always be a little bit better and only time will tell you that.

Anything you would like to say to your fans reading this interview? Just that we know you are out there and if you want to talk to us, check us out on myspace, we run our own page and we try to respond to every message, every day. 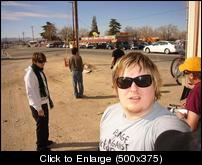