What religion are you? Personally, I don't have one. I'm fairly agnostic. Everyone in the band is drastically different though. We respect each other regardless.

What do you guys do for work right now, other than playing music? Dan is a tattoo artist. Marty helps his sister with her business. Scott writes music and spends time with his wife. Russ is trying to get a graphic design business going and recently got married. I work at a restaurant and do free lance music stuff when I can.

How did you come up with your band name? None of us did. It was original member Eric Reeder.

What does your band name mean? It's Greek for "Alive". And for the record, it's pronounced "ZAY-oh" not "ZOW". Although we get a kick out of the latter pronunciation.

Where was your best show? I don't know, "best" is so final. We always enjoy going to Anaheim CA. The crowds are good and we get to hang out with our manager Ryan, who is also a good friend.

How does it feel to tour with the band members? Everyone gets along pretty amazingly. There is very little drama. We all know when to be quiet I think is what it is. I've toured with people before and it's a constant barrage of talking (which leads to arguments). We tend to get in the van and everyone does their own thing whether it's sleeping, reading, listening to headphones. Everyone zones out. We're all pretty quiet.

Any advice for anyone thinking about making a CD? Just do it. But do it right. I think CD-R's have made bands lazy. Get your act together. Go to a decent studio (check around, there are cheap studios run by perfectly capable engineers that will work WITH you, not AGAINST you and won't rob you blind). See if you can find a small label to put it out. Even if they can't. Press it yourself. For around $2,000 you can record and press a pro-looking release that you can be proud of in the grand scheme of life, I think it's a good investment. Find the magazines or online sites that specialize in what it is you do and send them copies for review. You might be surprised, they might like it... and it gets the word out.

Anything you would like to say to your fans reading this interview? Just listen to the music. Quit worrying about the politics and the stuff that has nothing to do with the music. Too many emails about whether or not we smoke, or eat meat or go to church. Everyone in the band has a different belief. It doesn't bother us. We don't understand why it bothers everyone else.

Every bands music changes over the years, but do you like playing and the style of the old stuff? Some of it I really like. Some of the newer ZAO stuff is very dense and layered and can be tricky to make work live, which is a fun challenge and is really satisfying when it works. But when the old songs come up in the set and they're real simple and immediate, it's a different kind of rush. You know, just to be real caveman about it.

Do you have any advice to starting bands? Figure out what it is that you do, and find like minded people out there. Trade cds with them other bands, trade shows. If you live in a town and bands come through, offer them a place to stay, cook them a meal, exchange contact info. That band could very well hook you up with a show and do the same for you on your first tour. It's all about contacts. Try to travel as much as possible. It can be hard when you're starting out. Find a 4 or 5 hour radius of cities and try to hook up weekend shows.

What inspires most of your lyrics? That's mostly Dan. He has had a lot of really brutal stuff happen to him and that comes out in his songs, his own personal experiences. A lot of his stuff is sparked by movies, or things he hears in the news. He's constantly writing. I think it just depends on his current head-space.

What you are saying thru your music? Contrary to internet opinion, there is no unified message. If there is an overall theme that the band endorses it's acceptance. We don't really care if people are christian, atheist, satanist, straight-edge, raging drunks, vegan, straight... it doesn't matter. It's there for anyone to pull whatever they want to out of it. I don't personally want to be in a band that is militant ANYTHING. I like when bands leave it open. At the end of the day, for me, it comes down to: Do I like this music?

What is the best thing about music? Having an excuse to vent and not having the men in white coats cart you off to some padded hell.

Where have you been playing lately and how has your response been? Our last tour was all weird out of the way places. Which is really awesome. You'd think, Chico California? This is going to be awful, who's going to come... but you know what? those are the shows that always are the most fun. Sometimes the big cities, like LA, the kids are so overwhelmed with things going on that they get numb. The kids in these small towns are hungry for shows and they are grateful and it can make a tour so much more fun.

What other instruments can you guys play? I play piano and some bass and very rudimentary guitar. Scott can play bass. Marty is a pretty good guitarist in addition to his bass duties. Dan plays bass, some guitar, and drums. Russ can do bass, piano, and is an AWESOME drummer.

Did you have any previous band names? Scott and Russ had a band called Jade Meridian. Dan and Russ were in Seasons In The Field (with Stephen, the drummer I replaced). Russ and Marty did all sorts of terrible bands before they were in Zao together. 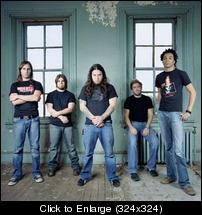