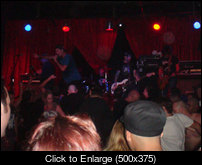 Genre: Punk;
First off, what a random show. I mean, two totally different styles of punk rock. Usually at Guttermouth shows there’s a fight, so I was looking forward to getting’ into a rumble. There were a couple of altercations, but nothing too serious. The first band that we actually paid attention to that night was Youth Brigade. This was my second time seeing Youth Brigade because most of their shows sell out. Why? Because their shows are sick. It seemed like they played forever. They played “Boys in Blue”, “Did you Wanna Die?”, “Violence”, “Fight to Unite”, “Sink with Kalifornia”, and my highlight of the show “I Hate my Life.” Like always for “Sink with Kalifornia” there is an army of punx waiting to stage dive into the crowd when the song starts to pick up. It’s an insane sight when you’re in the front. Another great show by Youth Brigade even though they didn’t play “Confusion” or “You don’t Understand.” By the time Guttermouth came on, about 1/3 of the crowd left. I like Guttermouth, but they’re one of those bands that I hardly paid attention to but I’ve heard their songs. Not to say that I wasn’t looking forward to seeing their performance because then I’d be lying. I really wish I could remember the names of the songs that they played. Girls on stage, alcohol, talking sh**, and crappy punk rock, that’s what Guttermouth gives you and if you don’t like that then go see Blink 182 for crappy punk rock. Ahhh!! What a random show that turned out to be a great show. 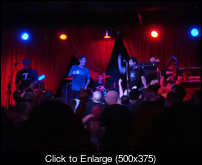 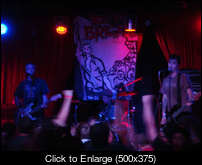