Young The Giant @ Stage AE with The Apache Relay

Featured Artists: The Apache Relay; Young The Giant;
This was the first time I was at Stage AE while it was set up for an indoor show. It seemed more like a bar with huge dance floor than a concert venue, with booze and tvs showing playoff hockey included. However this was the perfect venue for Young the Giant who had the whole crowd dancing and belting out every song at the tops of their lungs.

The opening band was The Apache Relay, which before the show I have never heard of but they did a great job. Their energy and style fit perfectly with YTG. They also had a really cool story about how exactly a year earlier they put on a show in the very small back room at Stage AE in front of only 15 people and now they were back in the Burgh rocking out for 100's.

As Young the Giant came on the first thing I noticed was their energy. They really know how to bring it for a crowd. They sounded great and put on an awesome show. You could tell they loved playing the songs as much as everyone enjoyed hearing them. They even played a version of R. Kelly's Remix to Ignition as one of their encores. I can't wait to see what they come up with on their second album. If you guys get a chance to see them perform live don't pass it up. 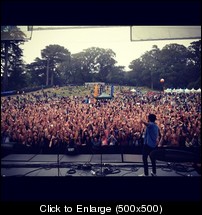