Walk off the Earth

There is definitely a trend in the Pittsburgh area of taking old churches and making them into kick *ss venues! I’ve been to Mr. Smalls a few times and it has always had a nice atmosphere and layout – from the weird but creative gourmet hot dogs in front of the door to the nice diner and bar experience inside, all coupled by a wide stage and a decent sized floor for dancing, moshing, or singing along.

Although I’ve been to Mr. Smalls a few times, this is the first time I felt like the crowd was tame and wasn’t prepared to bum-rush the stage. Everyone was ready to have a good time, sing, dance, and feel the music. With inde bands, small acoustic performances, and incredible showmanship how could anyone resist?

Right away the stage is taken over by a group of seven boys and one girl, calling themselves the Mowgli’s, an inde folk band straight out of California. They didn’t waste time at all getting right into their first song jumping and interacting with the audience. Their message was a simple word that clearly meant a lot to this talented group of eight; love. They stressed the importance of love and you could tell they felt what they were saying and practicing what they were preaching. I would do anything to be in the crowd at their next show (and every show after that!).

The middle of the show was taken over by a youtube sensation that has been and will continue sweeping the nation, Julia Nunes. Julia Nunes is a solo artist headquarted in New York. Her songs are about love, happiness, sadness, friends, and humor. Right away she engaged the crowd with a popular song – and one of my favorites – off her CD Settle Down called “Comatose”. She told a few stories to make us laugh but the best part of her performance was her original songs. I saw her live a few years ago and I noticed her set list has become less covers and more strong originals. However, she did play one mash up tune of a slew of covers to keep the crowd entertained. The cover started with Katy Perry, went through Ke$ha, and ended somewhere around Adelle. It was a fantastic and hilarious cover and just enough to keep us light and laughing and ready for more. Nunes loves to talk to her audience, lighten the mood, and throw in a lot of crowd favorites. It seemed like half the crowd knew her before and the other half just found out what CD they were buying after the show. It was a stellar performance from a ukulele and guitar back up.


‘Twas the night before Halloween, and all through the church, all the kids were excited, for Walk off the Earth!
Cobwebs were hung on the microphones with care (sort of), in hopes that a killer light show with awesome rock music, confetti, balloons, hype atmosphere, coreography, and maybe some covers - soon would be there’

That’s exactly what happened, the lights and cobwebs were strung up and with little to no wait Walk off the Earth was ready to blow our minds. They came out dressed as carebears for this special Halloween evening and got started right away with a song from their new album R.E.V.O. “Revolution’s in My Head”. Throughout their set list they sprinkled in covers, but clearly their original songs are strong enough to shake the church. I was very impressed with the light show as well as how their choreography added to the show. Everyone was here to see a performance, not a typical concert. There was confetti everywhere due to confetti cannons, kicking cymbals to sprinkle the audience in glitter, passing instruments around like footballs, audience interaction, jumping and dancing, and even giant four feet tall balloons thrown around toward the end of the set!

Walk off the Earth also got their start on youtube by covering some popular songs and doing it with a Walk off the Earth twist. The band went viral after covering “Somebody That I Used To Know” with five people on one guitar. This video is currently at 138,380,821 views (thats on the original video, not counting the copied words which add nother 5 or 6 million to the total). Luckily for their encore they played that cover live for us – with five people crammed into one guitar and “beard guy” looking nostalgically to the right.

It was a fantastic show with a lot of young bursting talent. Not only would I attend a show at Mr. Smalls again but I would see these bands over and over. It was such a positive show and a friendly audience all there to be taken over by the music. 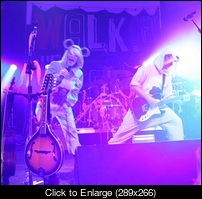 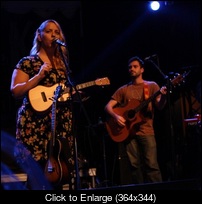 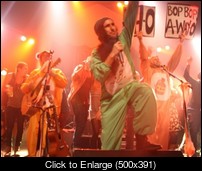