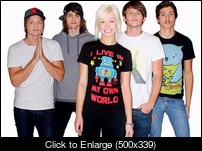 
When I first heard the album "What Are You So Scared Of?" I thought, 'Wow, the sky is the limit for these guys.' What are your thoughts on that?

-Thankyou! I like to think so too, not in the self assured way that might have sounded but in the sense that we're not willing to stop at anything and we still have a lot to achieve before our time is up!

Obviously you're much bigger in Australia than anywhere else - has it gotten to the point that when you go out, people recognize you and want pictures and autographs, and if so, how are you handling that?

-It's flattering to be recognised on occasion but no one really asks for my photo or autograph outside of touring and I kind of appreciate that.

Working with Mark Trombino has catapulted Tonight Alive into that next level - Have you even begun thinking about a follow-up album and if so, will Mr. Trombino be involved?

-He is perfect for us! We're half way through writing our second full length and very much plan to have Mark involved.

I noticed you're doing two tours in the US early this year. How do you feel about spending 5 - 6 months straight, touring America?

-Unfortunately due to some health issues within the band we've had to pull out from our SXSW appearances and Go Radio tour this March and April but could not be more excited to be a part of The Warped Tour this Summer. It's something we've always been aware of but have never had the chance to attend. I remember on the night of our first show saying to a friend that all I want was to play the Vans Warped Tour someday, it's like a dream come true.

Some have said they feel an extra rush to do a show on tour vs doing a show at home. Others have said the opposite. Can you explain what you guys feel doing shows back in Australia vs other countries?

-Playing shows in Australia is extremely different! The major cities are quite spread apart and with less places to play in-between than somewhere like America, you could almost say it's a lot more relaxed. The drives are a lot longer and with our scene it's not really possible to play a show everyday of the week so there's less rush in that sense. It's also a nice little luxury to travel with your own gear and vehicle rather than the mess that often comes with renting gear.

Looking over the list of bands at the Warped Tour this year, (which you are playing in), there's some pretty big name bands playing. Who are you most excited to meet and play with?

-We've made a bunch of friends over the past two years that we can't wait to tour with again (like We Are the In Crowd, Chunk! No Captain Chunk, Breathe Carolina, Blessthefall, Motionless in White and A Loss for Words). Otherwise, we can't wait to watch bands like New Found Glory, Yellowcard and The Ghost Inside to name a few.

Who writes the songs in the band and where does the inspiration for the songs come from?

-Whakaio writes a majority of the music and I write the lyrics and vocals. It's hard to put my finger on the direct inspiration but lyrically I am constantly making notes on things I say and think because that's often where my best ideas stem from!

I noticed on the discography there a few different tracks on the US version of "What Are You So Scared Of?" vs the Australia version. Why is that?

-We tried to cater for what would work best in the states.

It seems to be non-stop for you guys for the last many months, and many more months ahead. Do you have any plans to slow down or take a break?

-Once we take on a national headline run of Australia this May the year looks like it's going to be pretty non stop!

If I were to say, Tonight Alive is the biggest thing to come out of Australia since Hugh Jackman, what's your reaction to that?

-Hugh Jackman is hot [laughs]. Im flattered but we're not getting ahead of ourselves here, I think we still have a long way to come!

Thank you for your time and I wish you nothing but continued success! You guys rock.

-Dude thanks a lot!