Tonight Alive - What Are You So Scare Of? 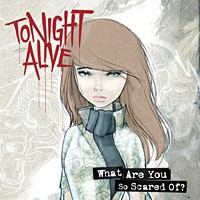 What Are You So Scare Of?

A review of the album from Tonight Alive

As a journalist, sometimes you get really excited about new albums and other times,

something comes across your desk you just aren’t quite sure what to expect. Today

that album is Tonight Alive - “What Are You So Scared Of?”

I’m not sure why I was scared to play the album but about 10 seconds in, I knew it was

Tonight Alive is a punk rock, alternative pop band that blast onto your speakers from

Sydney Australia. Instantly I drew comparisons to bands such as Hey Monday and

Paramore. Of course none of those bands are from Australia but they were the first

bands I thought of. As the album progresses other bands such as Jimmy Eat World,

on “Thank You & Goodnight”.

After “Eject, Eject, Eject!” - the first track which is a musical interlude to get you ready

for what you’re about to hear - comes the soon-to-be-famous track two: “Breaking &

Entering”. BOOM! This song comes out like a cannon. Kids will be driving with the

windows down and system up rocking this song in the not-to-distant-future. If you don’t

catch yourself doing the air guitar or drums, then you’re musically challenged and you

should consult your doctor to see if your ears are hearing properly .

The band isn’t a one hit wonder either. As the album progresses from track to track,

they continue to spew out hit after hit. “Let It Land” stands out on the album for being

different. It’s got a different feel and vibe. It’s not as pop punk, but it is. Hard to

explain, I know but it’s still a good song. It’s a bit more laid back and mellow punk song.

because no such track on the album will do that.

Tracks like “Starlight”, “Fake It”, “Thank You & Goodnight”, “Breaking & Entering”

love with Jenna McDougall (vocals) and the rest of Tonight Alive.

respectively. Once Jenna McDougall began singing their lyrics, the band took off. Soon

Before long, Tonight Alive got in the hands of legendary music producer Mark Trombino

- who’s worked with some of music’s biggest acts such as Blink-182 , Jimmy Eat

World, and The Starting Line. Mark took them under his wing for what has become

Tonight Alive’s first full length album - “What Are You So Scared Of?”. The album is

pure electricity that can only come from a truly, naturally, talented group of individuals.

The bands music is honest - no beats, loops, or alterations to “cheat” and make

them “better”. This album comes from extremely hard work and one would only imagine

how much blood, sweat, and tears went into recording an album as amaz-balls as this.

so if you want to impress your friends, you should get on the train right now. The

album comes out February 14, 2012 (Valentine’s Day for those who forgot) so if your

you go out and get this album to support great punk music. Otherwise you’ll be asking

yourself “What Are You So Scared Of?”