Who is your favorite band to tour with? Hot Water Music was one of my favorites. The Used were awesome guys. It’s important to us that the people we tour with are down to Earth. They have to be someone that we can have a conversation with.

How did you come up with your band name? We picked it in high school. We had a show coming up and somehow we came up with it. Now we are stuck with it.

What was your first show? It was at a benefit show for man aid at a community center in Irvine. It was funny. The three of us had never really been in any kind of real band. We did our best and it was fun.

Do you have a favorite venue? Not that I can think of. Chain Reaction is kind of where we grew up so that’s our home. We feel comfortable there.

What is your favorite country to tour in? We’ve been to Australia, Europe, and Japan. My favorite would have to be Australia. We were blown away at the response. It’s probably easier there than the other places because we are speaking the same language. It’s a nice feeling because the weather there is very similar to CA.

What were some of your favorite bands growing up? Michael Jackson, The Beatles, The Steve Miller Band, and NOFX.

Do you have any advice for starting bands? Well, things have changed from when we were starting out. The Internet has become a much more powerful tool for getting your music out there. There weren’t any of the hosting sites around that are around now. I think a lot of music is found through those now. That’s a good way to network. Another way would be to go to shows and pass out flyers for your band. We made demos and took those to shows with bands that we thought their fans wood dig our stuff and passed out two song demos to people. You got to just throw it out there. It’s really hard. Just be persistent. Keep at it. You have to just do it, even when you are losing money. It’s super hard to start but if you never get passed that stage then you will never get anywhere. It’s worth it though. You gotta put yourself out there.

How many tours have you been on? I have no idea. I couldn’t count if I tried. We’ve toured pretty constantly for the past few years.

How was the band formed? We all started hanging out in junior high. We started playing as a band in high school. We just decided one day to just jam in the garage and it just took off from there. 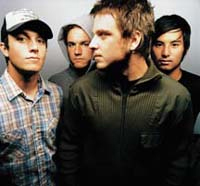