Los Angeles, CA - January 20, 2014 -The Used has announced that they will be releasing a new album titled Imaginary Enemy on April 1st, 2014. Album pre-orders are now available here: theused.net/preorder. "Imaginary Enemy" is the band's sixth studio full-length, following the success of 2012's Vulnerable, which debuted at #8 on the Billboard Top 200 charts, selling 32,000 copies in its first week alone and marking the group's fourth top 10 album. A band that has never shied away from using their music as a platform to ask the tough questions and evoke political conversation, The Used brings that passion tenfold on Imaginary Enemy. A palpable sense of the band's commitment, frustration, and optimism for the future lies at the very core of each track.

"We the people, in order to form a more perfect planet, must question the way the world works - and where the world is heading," says The Used frontman, Bert McCracken, in a statement about the new album. He continues, "Some view art as a way of escaping reality; others view art as a mirror reflecting our sometimes sad society; we believe art can be a weapon, used to shape the very world we live in. The Used is proud to present to you, 'Imaginary Enemy'."

The Used-which also includes guitarist Quinn Allman, bassist Jeph Howard and drummer Dan Whitesides formed in Orem, Utah in 2001, signing to Reprise Records that same year. Championed by producer and collaborator John Feldmann, the band issued their gold-certified Self-Titled debut in 2002, quickly cementing the Used as leaders among the post-hardcore elite, thanks in part to unforgettable singles like "Box Full of Sharp Objects," "The Taste of Ink," "Blue And Yellow" and "Buried Myself Alive." The band then released the CD/DVD combo "Maybe Memories" in 2003, now certified platinum, featuring B-sides, live cuts, demos and unreleased tracks, while still another gold record followed-2004's "In Love And Death"-spawning singles "Take It Away," "I Caught Fire" and "All That I've Got" - which earned the band their first MuchMusic Video Award nomination.

The band's second MuchMusic Video Award nomination came from 2007's "Lies For The Liars," for the music video for "The Bird and The Worm." Lies For The Liars hit #5 on the Billboard Top 200, led to 2009's "Artwork," which peaked at #10 on the Billboard Top 200. As if that weren't enough to keep a band busy, since 2001 the Used has also destroyed countless stages the world over, touring with a who's who of modern rock and heavy music contemporaries, and have been featured acts at major festivals like Warped Tour, Taste of Chaos, Ozzfest, Projekt Revolution and the UK's Reading and Leeds festivals.

2011 marked a year of change for The Used. Leaving Reprise Records, their label of ten years, the band formed their own label, Anger Music Group, which they have independently released 2012's studio album "Vulnerable" and an EP "The Ocean of the Sky" in 2013.

The Used will release "Imaginary Enemy" on April 1st, 2014. For more information, check out: www.TheUsed.net 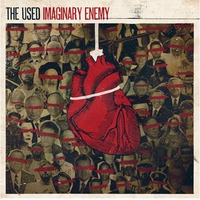